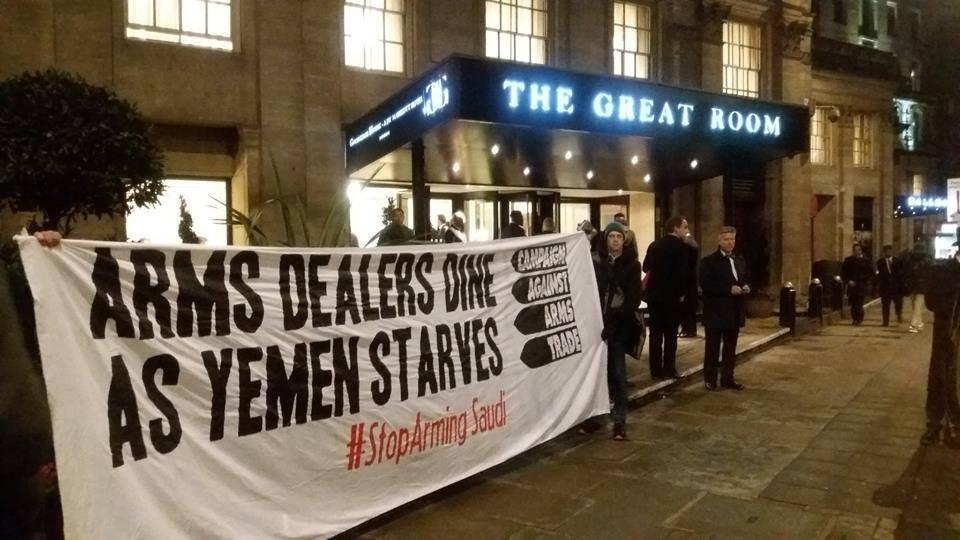 The former Labour Home Secretary Alan Johnson is facing sharp criticism as he prepares to address a networking dinner for arms dealers in London this evening (23 January).

Protests are planned at the Grosevenor Hotel in Park Lane as arms dealers and their allies arrive for the annual dinner of the euphemistically named Aerospace, Defence and Security (ADS) Group, the trade body for arms dealers in the UK.

Politicians and arms dealers who have profited from the bombing and starvation of Yemen will dine out at an event that costs £225 per head for members of ADS and £450 per head for non-members.  The event is an opportunity not only for arms dealers to network with each other but to seek to influence politicians and other decision-makers.

Members of the Peace Pledge Union (PPU) will join allies from the Campaign Against Arms Trade (CAAT), the Stop the Arms Fair coalition and other groups in protesting at the venue from 6.30pm.

While the guest list has not been published, a significant number of Members of Parliament are expected to attend. In 2015, CAAT obtained a copy of the guest list, which included 40 MPs. In some cases, MPs' tickets are paid for by arms companies.

Europe's largest arms company, BAE Systems, is expected to be well represented at today's event. BAE produces the Typhoon aircraft used by Saudi forces in the bombardment of Yemen. The company is in negotiations to supply yet more arms to the Saudi regime.

"Many of the companies in attendance have armed and supported the Saudi-led bombing of Yemen," explained Andrew Smith of the Campaign Against Arms Trade (CAAT). "While Yemen is being starved, the arms dealers will be swilling champagne, cosying up to politicians and trying to sell even more weapons."

He said that Alan Johnson "should not be using his reputation to legitimise and enable those that profit from war".

Symon Hill of the Peace Pledge Union added, "Not only does this absurdly expensive dinner provide an obscene contrast to the starvation that accompanies war in Yemen and elsewhere. It also provides another opportunity for arms dealers to exercise undue influence over politicians - yet another case of militarism subverting democray."