Climate and peace: not single issues

PPU supporter Ahlyah Ali urges climate campaigners and peace campaigners to recognise their shared concerns - and to work more together.

There is no peac 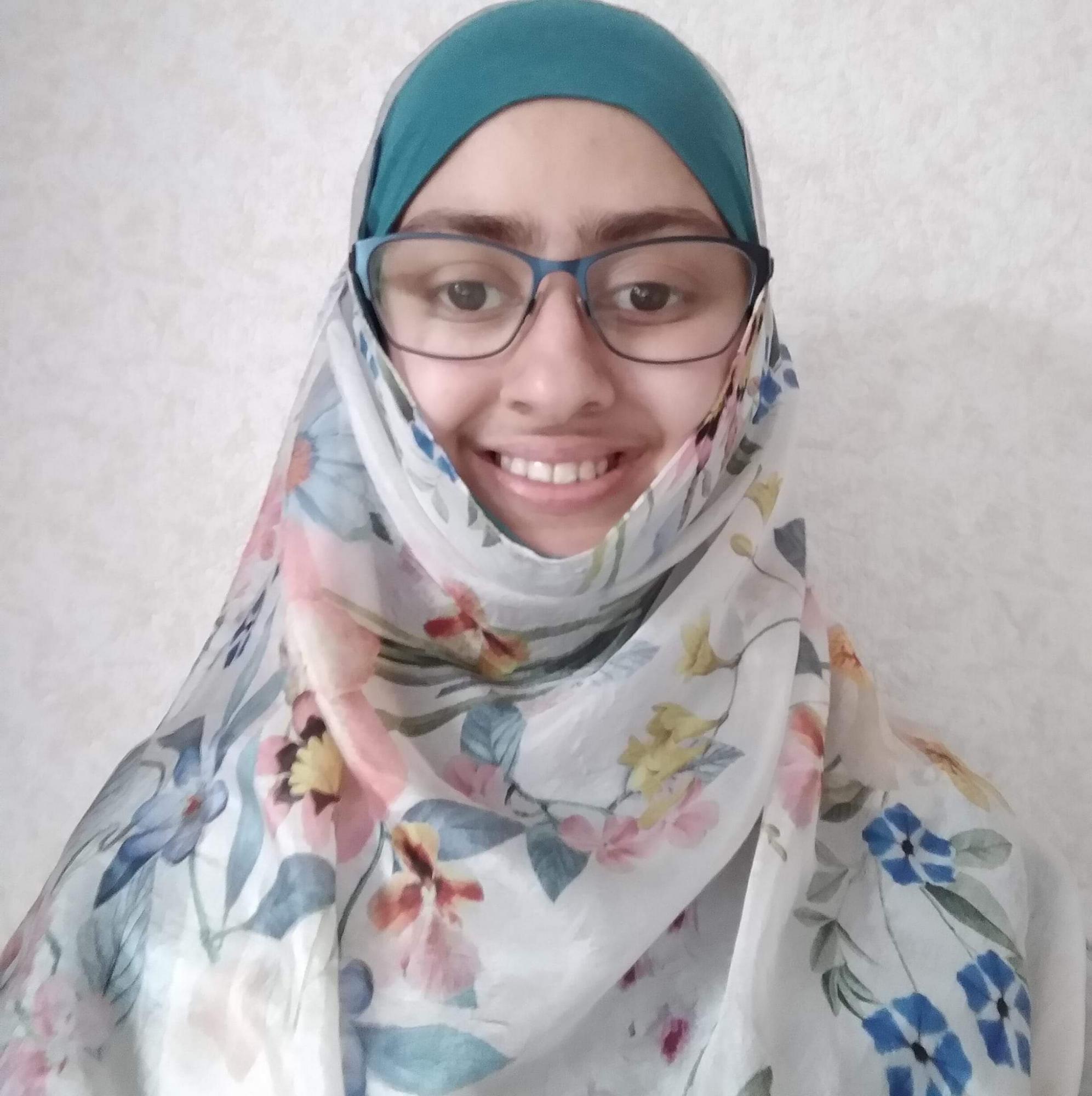 e without justice, a truth anyone committed to working for peace will know. And one of the greatest threats to global peace and security, as recognised by the UN, is climate breakdown. Millions will be displaced from their homes as they face increased tensions over water scarcity, crop failure and  the impacts of extreme weather in addition to the devastation of war. Dehumanised by politicians and the media, refugees are then turned away at the borders of countries most responsible for the conditions which have forced them to flee. We must fight for their rights.

Climate change is also known as a “threat multiplier”, exacerbating existing inequalities, and is fundamentally an issue of injustice. Those least responsible are facing the worst impacts, predominantly black and brown people in the global south; the same communities being systematically destroyed for the profits of the arms industry. It is the same structural inequalities which allow the lives of some to be seen as worth less than others when it comes to profit for the arms or fossil fuel industries at the expense of communities on the frontlines of war and climate breakdown.

Calls for doing what is “politically feasible”, for making incremental changes, are nothing more than lip service when it is clear the only just solution to the climate crisis is transforming the entire system to one which puts people and planet first. Business as usual is death; a fact activists continue to draw attention to.

Moreover, the image often used to depict climate impacts is of a white polar bear on a shrinking piece of ice; perhaps a more palatable image than the human face of this crisis. Even when speaking about climate change in terms of an “existential crisis”, it is referred to as a future threat with a number of years left to act. This fails to acknowledge that many face a daily threat to their existence as their rights are being eroded in an increasingly hostile political climate, and the lives already stolen by climate violence. As it is with the faces of “casualties” reduced, at best, to mere numbers in a death toll when it comes to the victims of war. Their stories are ignored under the glitz of the arms fairs and empty words of sending aid rather than ending arms. Yet we have the power to act, especially here in the UK, to build pressure holding the government and corporations to account to take real action for climate justice and peace.

Working in solidarity as activists is key to strengthening our movements if we wish to achieve our vision of a fairer, peaceful and more just world. It’s impossible, I feel, to be a “single issue” activist in a true sense when all struggles for justice are interlinked. Injustice anywhere is a threat to justice every where, as is so often said because we see the truth in it.

We need to build a more diverse and intersectional movement to collectively work for peace and justice. And we will win, however long the road may seem. You are part of a movement of people all across the world doing the same. Take hope in that to build something beautiful together. 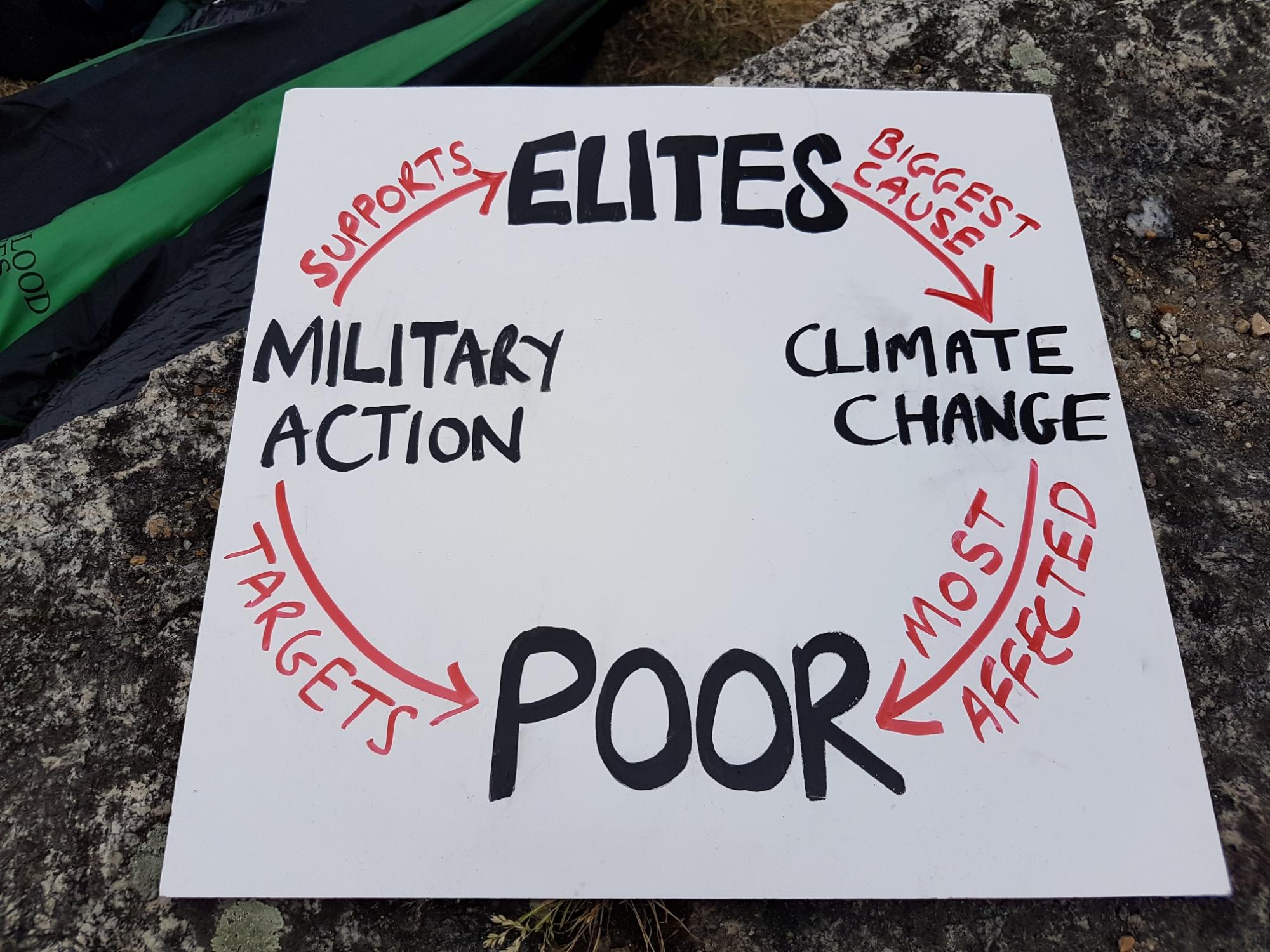 Many thanks to Zina Zelter for the diagram pictured above. Zina displayed the diagram while protesting against the DSEI arms fair in London in September 2019. 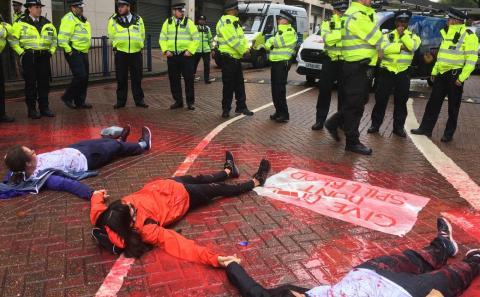