Arms company that supplies Saudis is disrupted by direct action 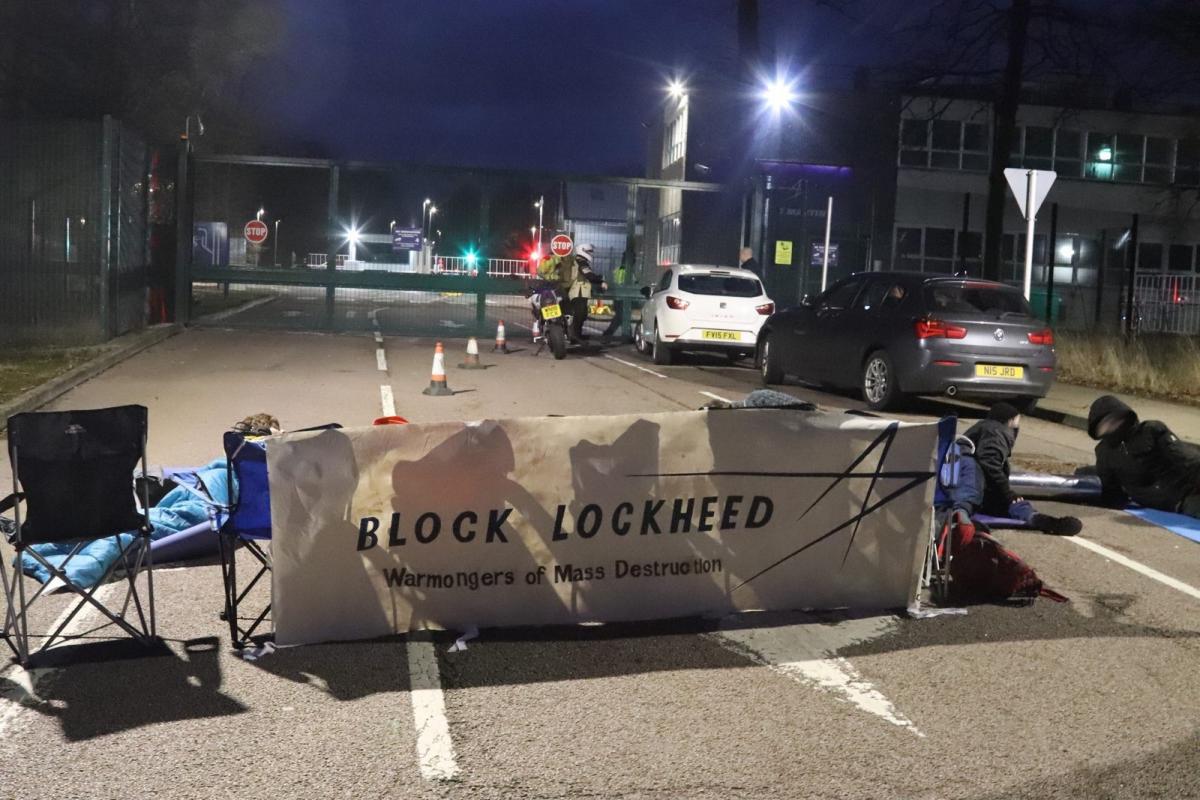 Arms company that supplies Saudis is disrupted by direct action

They have pointed to the similarities between the Russian invasion of Ukraine and the Saudi attacks on Yemen. Lockheed Martin is known for arming the Saudi regime that has bombed thousands of civilians in Yemen.

Members of the group Block Lockheed moved onto the access road at 5.45 this morning, preventing traffic from entering the site. They unveiled banners and signs exposing Lockheed Martin’s crimes against humanity.

They have locked themselves to each other to prevent access to the 64-acre site.

Block Lockheed said they were drawing a "line in the sand" and beginning a sustained direct action campaign against Lockheed Martin. Their action has been welcomed by the Peace Pledge Union (PPU), Britain's leading pacifist network.

The blockahers said that their action is in response to the company’s role “in the murder of civilians and environmental damage across the world”.

Police arrived at the site shortly after the blockade began, but as of 12.00 noon they had not tried to remove the campaigners by force.

The blockaders are clear that they will attempt to keep the site out of action for the rest of the day – and that they will keep up a campaign of nonviolent disruption against Lockheed Martin.

As the world’s biggest arms company, Lockheed sells weapons to a large number of governments and armed forces. As well as the criticisms of their Saudi sales, they have faced criticism for arming Israeli forces occupying Palestine, and other aggressive and oppressive regimes around the world.

“Lockheed Martin get rich selling weapons that cause untold destruction to lives in Palestine and Yemen, whilst simultaneously destroying our environment,” said Rebekah Lloyd, a spokesperson for Block Lockheed.

She added, “This is a line in the sand. We are telling them we won’t accept it any more. We stand with our friends across the world campaigning for an end to this blood-soaked industry.”

Symon Hill, Campaigns Manager of the Peace Pledge Union (PPU), said, “The world is rightly appalled by Putin’s atrocities in Ukraine. The Saudi regime’s behaviour in Yemen is very similar.”

He added, “We are horrified by Saudi attacks on Yemeni civilians in the same way that we are horrified by Russian attacks on Ukrainian civilians. Yet the UK government allows arms dealers that supply Saudi forces to operate on the streets of Britain. Nonviolent direct action is an important way of resisting this outrage, as people put their bodies in the way of violence and militarism.”

Other arms companies that operate in the UK are also known to supply Saudi Arabia, including BAE Systems. In addition, the UK armed forces provide military training to Saudi troops. Members of the Royal Saudi Air Force are trained at RAF sites in Britain.

Amnesty International reported in 2019 that Lockheed were regularly supplying arms to Saudi Arabia and the UAE, which were then used against civilians in Yemen.

Amnesty International is one of several international agencies that has accused Saudi forces of deliberately aiming for civilian targets in Yemen. Vladimir Putin’s recent attacks on Ukrainian civilians have drawn comparisons with the Saudi bombing of Yemen. As of this month, the bombing of Yemen has been going on for seven years.

Meanwhile, Human Rights Watch has reported that Lockheed weapons were used by Israeli forces in attacking Lebanon in 2006 and that they continue to use them in their occupation of Palestinian Territories. Lockheed Martin supplied weapons to Israeli forces as recently as December 2021.

The Peace Pledge Union is a collection of people who have pledged to resist all war and to tackle the causes of war. We are the British section of War Resisters' International. Join us here!