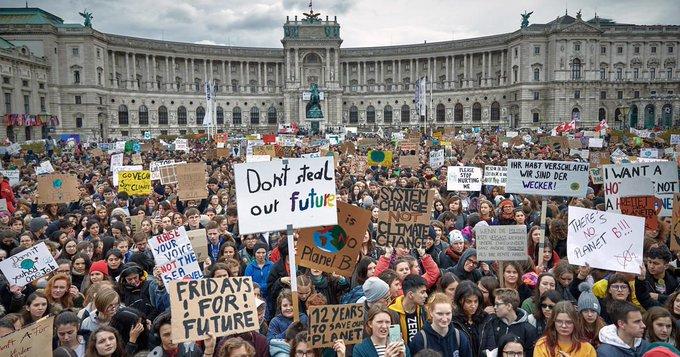 The head of the British army has been criticised for claiming that the army can attract more young recruits by being “environmentally sustainable”.

Ahead of today's climate strikes, young members of the Peace Pledge Union (PPU) accused Mark Carleton-Smith, Chief of the General Staff, of jumping on the bandwagon in a desperate attempt to meet recruitment targets. They pointed out that climate change, war and poverty all fuel each other.

Latest figures suggest the army is 7,000 people short of its recruitment target.

Mark Carleton-Smith said last week that adopting environmental policies would benefit the army “especially in the eyes of that next generation of recruits that increasingly make career decisions based on a prospective employer’s environmental credentials”.

But young PPU supporters joining today's climate strikes insisted that the lack of recruits has more to do with young people's recognition that the world's problems cannot be solved by war or by military values such as obedience to authority.

Pacifist and climate striker Anya Ramamurthy, 17, who is on strike from her Sixth Form in London today, said:

“The military trying to recruit us by making themselves more environmentally friendly is disgusting and frankly won't do anything. The military have clearly not listened to our demands! Making yourselves more environmentally friendly is not what we are demanding. We are asking for system change. Without social justice and peace we cannot reach climate justice. We are strong, we are educated, we know our rights and have our own morals! I will not let the military strip me of this.”

“There’s nothing green in the arms industry or anything linked to it - which the army obviously is. Young people are not stupid, they will see right through this as they did with the army’s pathetic adverts grouping us into their own categories.”

“Calls for doing what is 'politically feasible', for making incremental changes, are nothing more than lip service when it is clear the only just response to war and the climate crisis is to transform economic and political systems so that they put people and planet first. Business as usual is death; this is the reality we're drawing attention to today.”

The Peace Pledge Union is a UK-based pacifist network. PPU members work with pacifists and anti-militarists around the world through War Resisters' International.

The PPU welcomes today's climate strikes as an example of nonviolent resistance, and backs calls for peace activists and climate campaigners to work together.