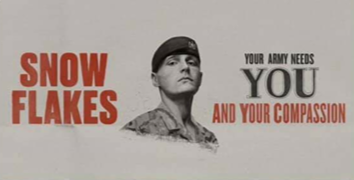 The British army has been accused of patronising young people with a new recruitment campaign based on stereotypes of "snowflakes", "phone addicts" and "me-me-me millenials".

The Peace Pledge Union (PPU), a longstanding British pacifist network, described the campaign as the army's latest desperate attempt to meet recruitment targets. They added that the young people who are choosing not to join the army are showing more wisdom than the army's leaders.

The campaign features World War One-style posters with images of modern young people, followed by the statement "Your army needs you".

The PPU pointed out that this is the latest in a string of unconventional recruitment campaigns prompted by the army's failure to meet recruitment targets for several years. They predicted that it would be as unsuccessful as the other campaigns.

The advertising campaign includes a one-minute film on the Army Jobs website, which shows a young black woman being bullied at work and choosing to join the army instead. The images of army life in the film appear to include an image of soldiers advancing on protesters with raised batons.

"Have we learnt nothing in 100 years? This campaign is using World War One imagery and once again generals and politicians are urging young people to volunteer to join an organisation in which they are expected to kill and die when someone more powerful than them orders them to.

In their desperate attempts to meet recruitment targets, the army has resorted to increasingly bizarre and misleading advertising campaigns. Young people who choose not to join the army are showing more wisdom than the military leaders who think that they can patronise and pressurise people into signing up.

"Many young people today are well aware of a reality that generals and politicians won't accept: that armed force cannot solve the world's problems and that we need to tackle the underlying causes of conflict. Many young people are choosing compassion and conscience over violence and conformity. The low levels of army recruitment are something to celebrate."