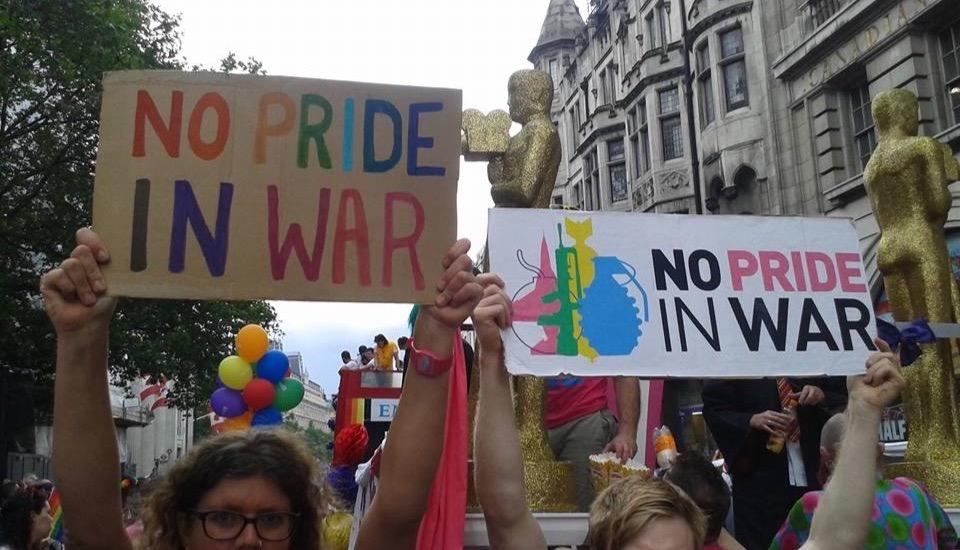 LGBTQ campaigners have joined with the Peace Pledge Union and other groups to urge organisers of LGBT Pride events not to accept sponsorship from arms dealers.

BAE is sponsoring several LGBT Pride marches in the UK this year in a desperate attempt to improve its image. It is one of the world's largest multinational arms companies, supplying weapons around the world to almost any government willing to buy them.

BAE is a lead sponsor of Pride marches this summer in at least three British towns: Portsmouth, Woking and Blackpool. The sponsorship has been condemned by members of the No Pride in War campaign, a coalition of groups including the Peace Pledge Union (PPU), Lesbians and Gays Support the Migrants (LGSM), London Bi Pandas, the Campaign Against Arms Trade (CAAT) and other grassroots LGBTQ, peace and human rights campaigners.

At the same time, BAE is supplying weapons to some of the world's most viciously homophobic regimes, notably Saudi Arabia. BAE is known for its close relationship with the Saudi regime, which routinely imprisons, tortures and kills people for engaging in same-sex relationships or not conforming to gender expectations. BAE is also heavily complicit in the supply of weapons used by the Saudi armed forces to bomb civilians in Yemen.

Protests are expected against BAE at several Pride events. Over 5,000 people have signed a petition to Pride in Surrey - who are organising the parade in Woking - urging them to ditch BAE sponsorship. The petition was started by Surrey-based gay PPU activist Tim Rosson. A similar petition has been started about Pride in Blackpool.

Given the towns involved, it seems that BAE is targeting smaller and newer Pride marches that are likely to receive less funding than larger or longer-established events.

Tim Rosson said, "While BAE Systems is happy to present a good face by showcasing employee diversity and sponsoring Pride events, it clearly does not regard women and LGBTQ+ people as important in countries it does business with, some with institutionalised discrimination and violence against them. These include Saudi Arabia... where LGBTQ+ people can be beaten and put to death."

The Peace Pledge Union regards military sponsorship of Pride events as an example of everyday militarism, whereby military values and organisations creep into ever more areas of civilian life.

The PPU and other members of No Pride in War are trying to discover any other Pride events that have been approached by, or accepted sponsorship from, BAE Systems or other arms companies. If you have any information, or would like to be part of the campaign, you can reach us at mail@ppu.org.uk or on 020 7424 9444.