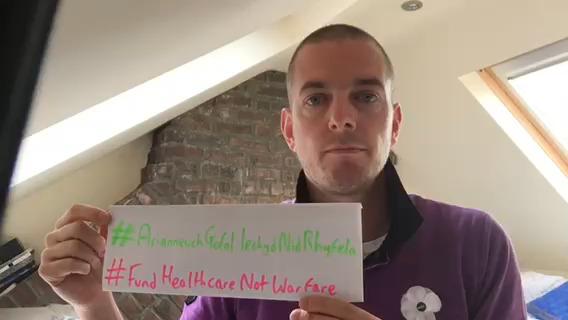 A day of online action has begun as people take to social media to insist that military budgets must be diverted to tackling Covid 19 and related threats.

By 11.00am, hundreds of people in the UK had already taken to Facebook, Twitter and Instagram to support for the campaign, some with messages such as "Bombs can't defend us from Covid 19". Some are posting photos of themselves holding up such messages.

The day of action has been organised by the Peace Pledge Union (PPU), with the encouragement and support of other peace and human rights groups such as Medact, Conscience and Scientists for Global Responsibility. It marks the launch of the PPU's new campaign, Healthcare Not Warfare.

The PPU said that money allocated to "defence" should be used to fund things that will really defend us, rather than being spent on preparations for endless war, which will make no-one any safer.

Early this morning, the PPU posted an image online pointing out that UK ministers have recently spent £10.4bn on 48 F35 figher jets. The cost of just one of these jets could pay for at least 8,000 ventilators. Despite this, the government remains committed to buying 90 more of these jets.

Early today, the BBC broke the news that some NHS trusts are worried that they have such a severe shortage of hospital gowns that the may not even have enough to last them for the weekend.

The UK government maintains the seventh highest military spending in the world. In December, Boris Johnson committed to increasing it further in the following year.

Although armed forces personnel have thankfully been building hospitals and delivering medical supplies, this involves only a small percentage of the armed forces and related resources.

"If the last few weeks have taught us anything, it's that guns and missiles are of no use against a global pandemic," said the Peace Pledge Union's Ed Bridges (above) in a video message posted online by the PPU early today.

Speaking from his home in Cardiff, Ed added, "Hospitals and care homes don't need tanks and they don't need fighter jets. What they need is ventilators, proper PPE, and more and better-paid staff."

In support of the campaign, the poet Rebecca Lowe has published a new poem called Healthcare Not Warfare. A recording of her performing the poem has been shared online for the first time today.

The PPU will be posting further video clips during the day, inculding a message from actor Michael Mears.

Many more people are expected to take to social media during the day to add to the call to fund healthcare, not warfare. The campaign will continue beyond today's day of online action.