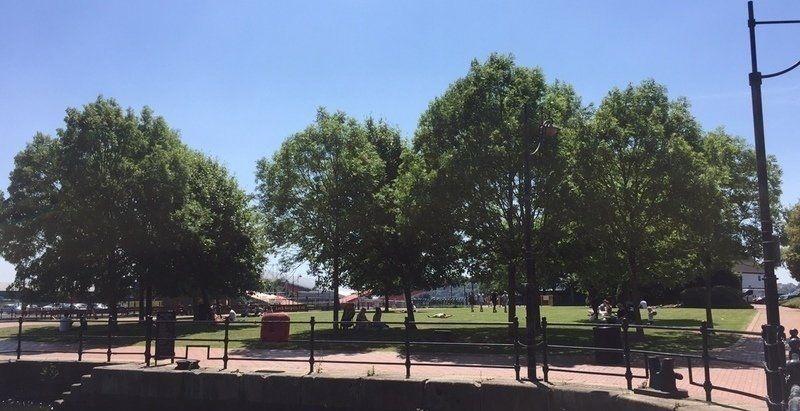 Cardiff residents have been backed by peace and environmental groups in resisting plans to sell a park to a museum that promotes the armed forces.

Cardiff Council has already given planning permission for the Military Medicine Museum, previously based in Hampshire, to be built in the Tiger Bay area of south Cardiff. However, the sale of the land in Britannia Park (pictured above) has yet to go ahead.

Despite its name, the Military Medicine Museum does not simply document the history of war and medicine. As it currently stands, it encourages a pro-military view of the world and lists the promotion of armed forces recruitment as one of its official aims.

Local people in the Tiger Bay area of Cardiff say that the Council has failed to consult meaningfully with the local community and that the museum will do nothing to reflect the area's multicultural working class history.

The area has one of the highest representations of people of colour in the whole of Wales, and occurs in the context of recent calls for a Black History Museum commemorating the history of Tiger Bay and the Docks, which the Council has not supported.

Over 400 people in the area have already sent letters to Cardiff Council leader Huw Thomas, objecting to the plans as an example of everyday militarism.

They have allied with environmental and pacifist groups, including the Peace Pledge Union, Cymdeithas y Cymod and Cardiff Green New Deal.

“The people of Butetown and beyond do not want a Military Medicine Museum,” insisted local resident Mymuna Soleman, founder of the Privilege Cafe, which explores social and political issues locally. “They want a museum that celebrates Tiger Bay and the Black history of Wales”.

Peace Pledge Union spokesperson Ed Bridges, who lives in Cardiff, said, “The proposed museum's official aims include promoting military recruitment, and it would be doing so in one of the most deprived wards in Wales”.

He added, “The people of Cardiff Bay deserve something better than having this sort of everyday militarism foisted upon them. Their voice must be heard.”

Other people campaigning to stop the Military Medicine Museum include former Glamorgan cricket captain Ossie Wheatley, a member of Friends of Britannia Park.

The planned Military Medicine Museum building will be five stories high and take up much of the precious green space that serves as an oasis of green for residents, visitors and workers alike.

Cardiff Council's plans have been further undermined by revelations regarding the Military Medicine Museum's finances. It made a loss of around £300,000 in the year 2019-20.

Rhun Dafydd, chair of Cymdeithas y Cymod, a leading Christian pacifist group in Wales, said that the museum “promotes and glorifies war and violence” and “doesn't represent the community and heritage of Butetown”.

If you live in (or have connections with) Cardiff, you can send a quick letter to the Council's leaders at https://actionnetwork.org/letters/dont-sell-britannia-park.