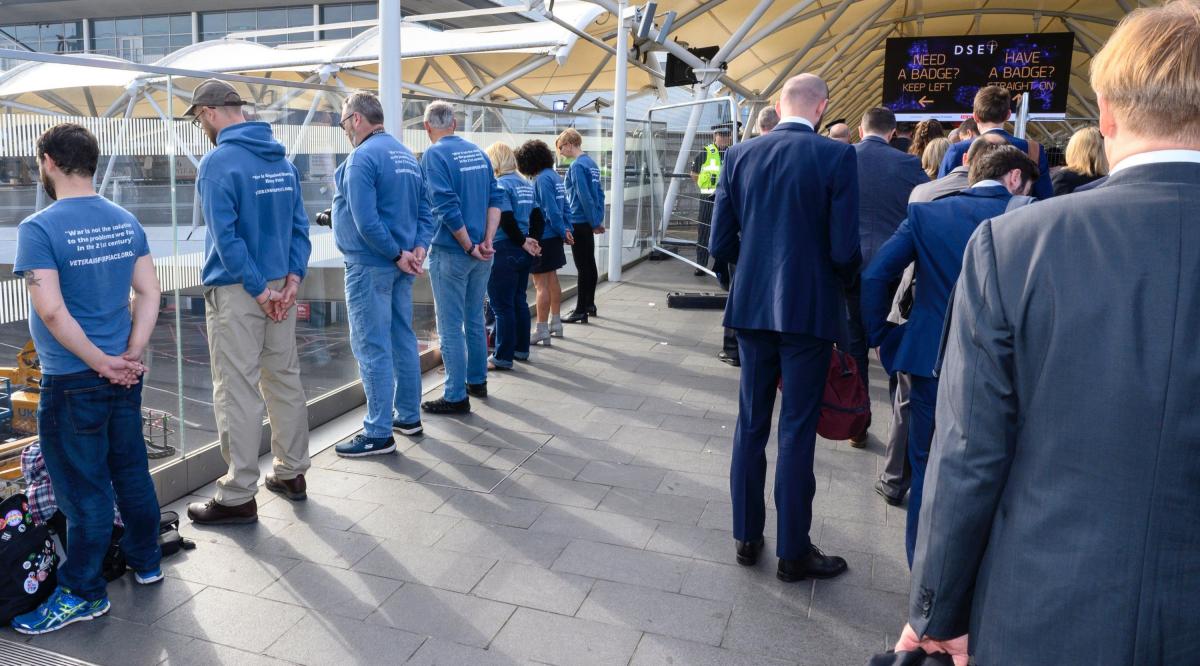 The DSEI arms fair has opened in London, as a poll reveals that such events are opposed by a majority of the British public.

The London arms fair - known formally as Defence & Security Equipment International (DSEI) - takes place every two years in London's Excel Centre. Nine days of protests and peaceful direct action have disrupted the setting-up of the arms fair, with hundreds of people taking part in blockades of the entrances, supported by thousands of others.

A poll published as the fair opened today (Tuesday 10 September) revealed that 60% of the British public oppose government-backed arms fairs involving human rights abusers. In addition, 64% oppose the sale of arms to Saudi Arabia, including 58% of Conservative voters. The Saudi regime is once again on the guest list for DSEI.

Today has already seen people hanging anti-DSEI banners from buildings near the Excel Centre and sailing a boat next to a warship docked at the venue. Members of Veterans for Peace staged a protest as the arms fair opened, turning their backs on arms traders arriving at the event (pictured above).

Over 116 people have so far been arrested, including several members of the Peace Pledge Union. The PPU is one of many groups that make up the Stop the Arms Fair coalition. Others include the Campaign Against Arms Trade (CAAT), War on Want, religious groups, trades unions and local community groups.

The authorities have deployed hundreds of police officers to ensure that peaceful protesters do not prevent DSEI going ahead.

Several times police have accused peaceful protesters of "breaching the peace". Campaigners have pointed out that they are upholding peace by trying to prevent an arms fair.

Among the more bizarre moments was the arrest of PPU member Richard Barnard. He was stopped and searched while handcuffed and then arrested for being "equipped to commit an offence", on the grounds that he was carrying a marker pen and a tube of glue. He was released without charge after eight hours in custody, only to be stopped and searched again the next day.

Richard said that the police's attitude to him was "offensive", adding, "We're here to make a peaceful protest against the arms trade, and against the heinous crimes that are committed, and the weapons".

On Saturday, PPU members observed an act of remembrance outside the Excel Centre as the arms fair was being set up inside, reading out the names of 100 civilians in Yemen killed by Saudi forces. This is only a small percentage of the thousands of casualties in Yemen.

Several people have become new members of the Peace Pledge Union since the protests began, including four who joined while blocking the road to the arms fair.