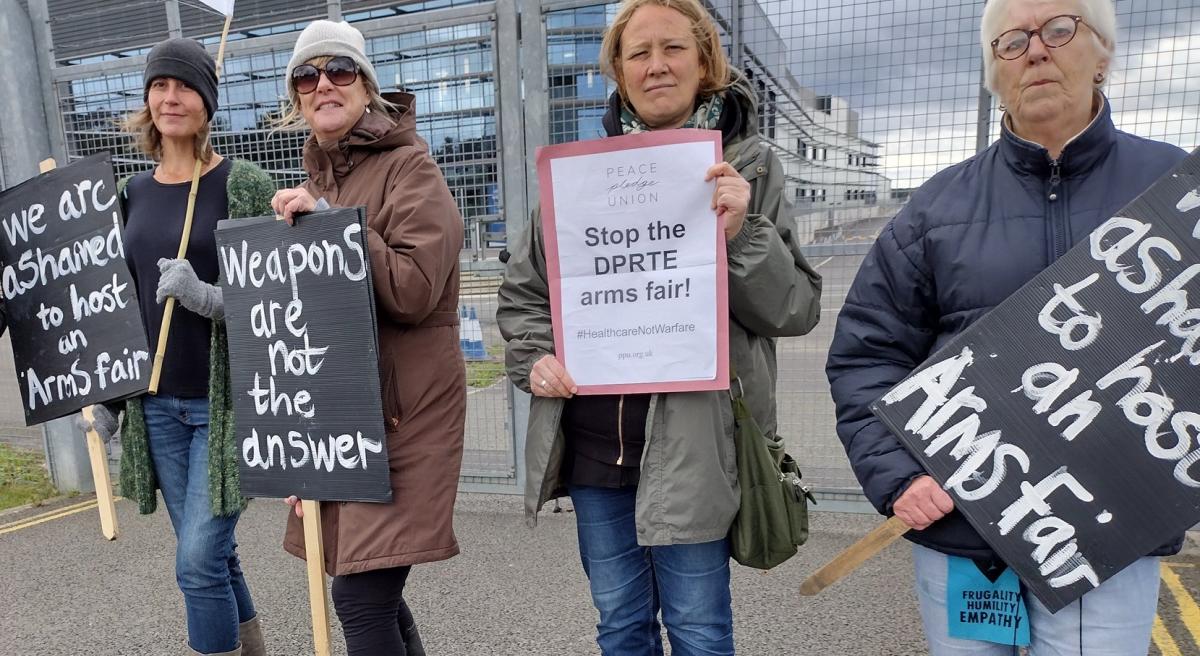 An arms fair in the Hampshire town of Farnborough yesterday was greeted by demonstrations outside the event and in the town.

Demonstrations took place at two of the entrances to the event, at Farnborough Main rail station and in the street as arms dealers and government officials met for an arms fair known euphemistically as DPRTE (Defence, Procurement, Research, Technology and Exportability).

The protests were organised by local people in Greater Rushmoor Action for Peace with support from other locals and from national groups including the Peace Pledge Union and the Campaign Against Arms Trade.

While locals made up the majority of demonstrators, they were joined by supporters from elsewhere. Protesters at each of yesterday’s peaceful demonstrations were met with excessively large numbers of police and police vehicles.

DPRTE has previously taken place in Bristol, Cardiff and Birmingham but was chased out of each city by nonviolent protests. By retreating to Farnborough, home of the arms company BAE Systems, organisers may have hoped that they would have no protests to contend with. Yesterday proved them wrong.

Despite Farnborough’s close links with the arms industry, a number of passers-by and drivers expressed their support to demonstrators yesterday, easily outnumbering the few who shouted insults.

Banners attached to railings near the venue called for an end to the DPRTE arms fair, to arms sales to Saudi Arabia and to militarism, and promoted active nonviolence and the need to tackle the climate emergency.

They also challenged the recent AUKUS deal under which the UK and US governments have agreed to supply nuclear-powered submarines to Australia. Boris Johnson today defended his AUKUS in his speech to the Conservative Party conference, while failing even to address any of the arguments against it.

Only two days before the Farnborough arms fair, UK “Defence” Secretary Ben Wallace announced that £5bn would be spent on a new Digital Warfare Centre, despite the government claiming that it was necessary to cut Universal Credit by £20 per week.

The Peace Pledge Union called for an urgent change of priorities away from high military spending towards tackling the deadly risks that people really face, such as pandemics, poverty and climate chaos.

The protesters against the Farnborough arms fair included several local people who had been involved only three days earlier in nonviolent direct action to resist the use of private planes by super-wealthy individuals at Farnborough airport.

The Farnborough arms fair is the second of four arms fairs to take place in the UK this autumn. The DSEI arms fair in London last month was met by sustained protests including nonviolent direct action.

The Liverpool arms fair takes place next week, followed by the Malvern arms fair on 4 November.

Want to join the resistance to militarism? Find out about our plans!