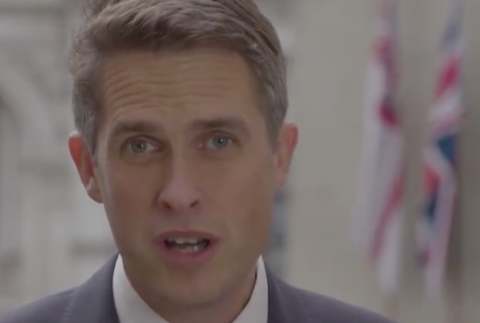 UK Defence Secretary Gavin Williamson has been accused of ramping up military tension with the deployment of a UK warship to Ukraine.

Williamson visited the ship in the Black Sea, posing for photographs on board with Ukrainian Defence Minister Stepan Poltorak.

The Peace Pledge Union (PPU) said that the Russian and British governments are using each other's miltiarist policies to justify their own. They insisted that adding yet more troops and weapons to the region would make nobody any safer.

The PPU, along with many other peace groups around the world, has criticised both Putin's government in Russia and Pereshenko's government in Ukraine for using military tension to improve their own image and divert attention from domestic problems. They added that Williamson and the UK government were following the same practice.

The Royal Navy warship arrived in the Black Sea yesterday (21 December).Gavin Williamson said that its presence would "send a message" to Vladimir Putin about the UK government's support for the Ukrainian government.

He added, "The people of Britain, Russia, Ukraine  and elsewhere have more in common with each other than they do with those who claim to be serving them by preparing for war. We stand in solidarity with people around the world who are resisting miltiarism with active nonviolence."

The Peace Pledge Union is the British section of War Resisters' International, which unites pacifists and other anti-militarists around the world.