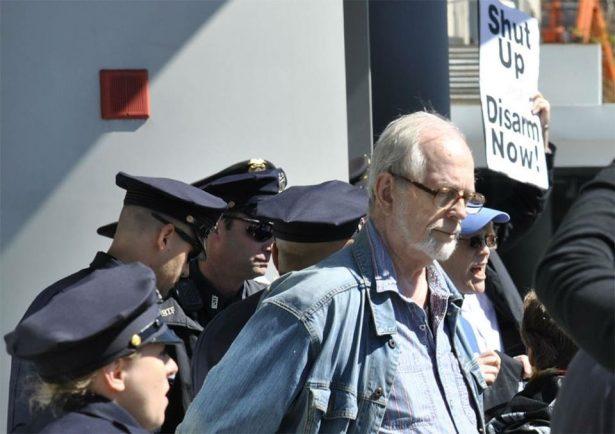 Peace activists around the world are paying tribute to David McReynolds, a longserving pacifist campaigner in the US and former chair of War Resisters' International.

David died on Friday (17 August 2018) after suffering a fall in his home in Los Angeles, from which he did not regain consciousness. He was 88.

David McReynolds came to public prominence in 1965, when he was one of five war resisters in the US who burnt their draft cards in public. Their example inspired countless similar actions aruond the US.

From 1960 until 1999, David served on the staff of the War Resisters' League (WRL), which is the Peace Pledge Union's sibling organisation in the US. He was imprisoned several times in the US for his peace ativism and in 1978 he was arrested by the Soviet authorities while supporting Russian peace activists demonstrating in Moscow. In 1980, he became the first openly gay person to run for US President, standing as candidate for the Socialist Party of the USA.

David was chair of War Resisters' International (the global pacifist network of which the Peace Pledge Union is the British section) from 1986 to 1988.

Albert Beale, chair of the Peace Pledge Union, said he was saddened by the loss of a "fine comrade and good friend".

Ed Hedemann, a former colleague of David's at the WRL in the US, said, "He could always be relied upon as a brilliant, challenging, blunt thinker, speaker, and writer, who many times came up with projects — some resulting in his arrest — that would help propel WRL's militantly pacifist message to the wider public".

David will be remembered not only as an inspiring activist but also as a keen photographer and cat lover. David's cat had died only the day before David.

Moses John of the Pan African Nonviolence and Peacebuilding Network said, "Let us continue to pursue his footsteps in remembrance of him and all those who struggled and passed on for a cause of a nonviolent, peaceful and democratic world for all".