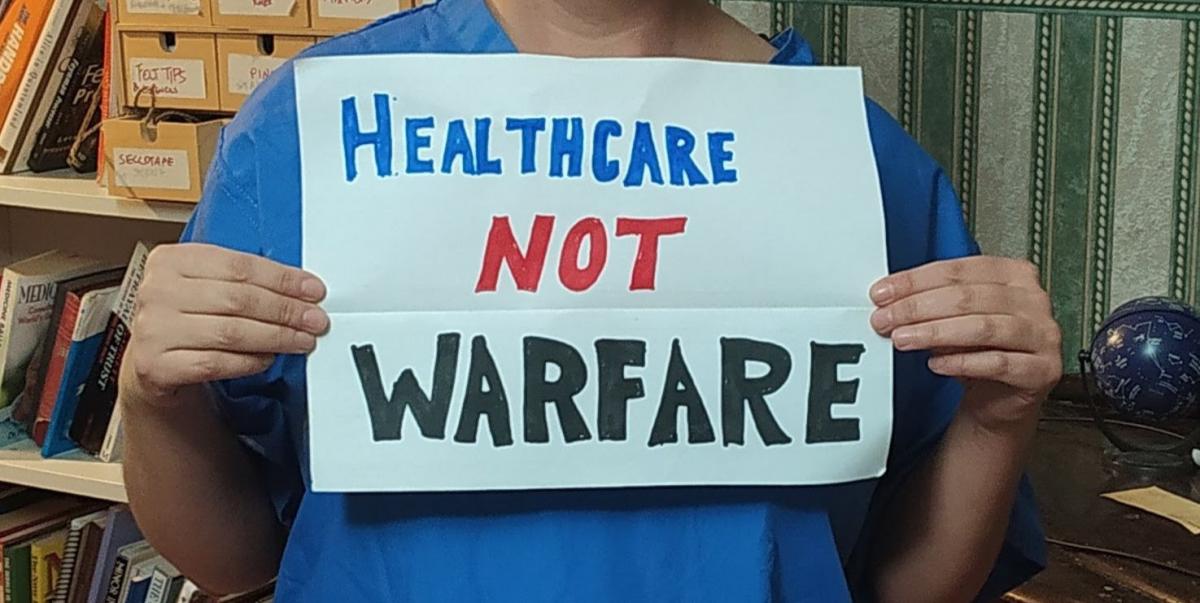 People from around the UK have joined calls to divert military spending to tackling problems caused by coronavirus.

A day of online action called by the Peace Pledge Union on Friday 17th April saw people of varied ages, backgrounds and beliefs take to social media to post messages, photos and videos in support of the PPU's new campaign: Healthcare Not Warfare.

Supporters and allies posted photos of themselves online with posters and placards bearing messages such as “You can't bomb a virus” and “Fighter jets won't defend us from Covid 19”.

Following an arms deal in 2018, the UK government has spent £10.4bn of public money on 48 F35 fighter jets. They remain committed to buying another 90, despite the costs incurred by the coronavirus pandemic and public outrage over underfunding of the NHS.

As the day began, the BBC broke the news that some NHS trusts feared that they did not have enough hospital gowns to last the weekend.

People posting messages of support for the campaign ranged from teenage school students to 95-year-old Donald Saunders, who sent a message via Facebook while self-isolating at his home in North Wales.

Public Health Researcher Ceri Dare was one of the first to endorse the PPU's campaign. She pointed out that government reviews have been listing a pandemic as a serious risk since at least 2007.

“The government could have put time, money, resources into making society better prepared,” she explained. “We could have had a properly funded NHS, adequate social care, key workers could be valued – a society that's resilient for everyone. Instead of that we have weapons of war, which are no use to anyone now.”

Video messages during the day included a new poem by poet Rebecca Lowe, called Healthcare Not Warfare. Later, a one-minute video clip from actor Michael Mears invited views to imagine a world in which the billions wasted on weapons were used instead to address human needs.

There were a significant number of Welsh-language messages, from Welsh PPU members and from Cymdeithas y Cymod (the Fellowship of Reconciliation in Wales).

Along with the PPU, other organisations backing calls to divert military spending include Scientists for Global Responsibility, Medact, Pax Christi, Conscience, the Campaign Against Arms Trade (CAAT) and the Fellowship of Reconciliation (England and Scotland).

The Student Christian Movement took the opportunity of the day of action to express their formal endorsement of the PPU's Healthcare Not Warfare campaign.

The PPU said that money diverted from military spending could contribute towards NHS and social care costs, help for people facing poverty and unemployment due to the lockdown, or support for people struggling with mental health problems during isolation.

The PPU has welcomed the commitment of military personnel building hospitals and delivering medical supplies, but they have pointed out that this involves only a small percentage of the armed forces. They have called for the first to be the first step in diverting military resources and budgets to civilian use, to meet real human security needs.

“Military spending is rooted in inequality,” said Anya Nanning Ramamurthy in the last video message of the day. “For hundreds of years, a few have been winning while many have been losing out. It's now more important than ever that we come together as one global family and put our money into saving lives, not destroying them.”