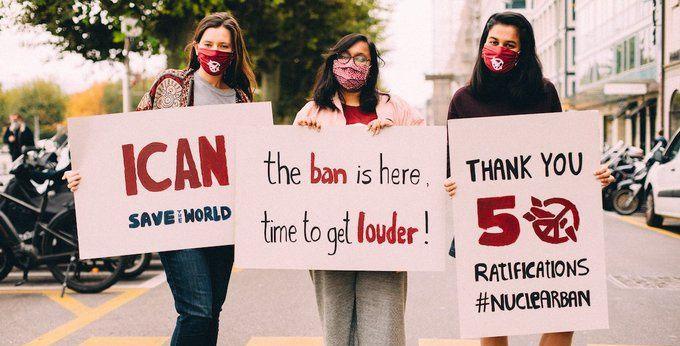 50 states have ratified the Treaty on the Prohibition of Nuclear Weapons, putting nuclear-armed states on the wrong side of international law.

The treaty will come into effect on 22nd January 2021. The world's nine nuclear-armed states are expected to try to ignore the treaty and continue to pursue their militarist ambitions.

The treaty, which bans nuclear weapons, was approved by 122 countries at the United Nations General Assembly in 2017, but needed to be ratified by 50 countries to take effect. Honduras today became the 50th country to ratify the treaty.

The International Campaign to Abolish Nuclear Weapons (ICAN) said today that the ratification of the treaty will put heavy pressure on the nuclear-armed states to modify their behaviour. They made clear that this is not the end of the campaign but a massive step forward, and that intense campaigning is now needed to add to pressure on nuclear-armed governments.

In social media posts, ICAN made clear that the ratification of the treaty is a beginning rather than an end. On Twitter, they wrote, "With the #nuclearban treaty ready to enter into force, we need you to get loud. Tell your friends, your bank, your university, your elected representatives that nuclear weapons are illegal. Tell them it’s time they stand on the right side of history. Let's go!"

ICAN, who won the Nobel Peace Prize in 2017, includes partner organisations in 103 countries around the world.

The nuclear-armed states – USA, Russia, UK, France, China, Israel, Pakistan, India and North Korea – have not engaged with the international discussions around the treaty, provoking accusations of arrogance from less powerful countries.

“Decades of activism have achieved what many said was impossible,” said ICAN's Director, Beatrice Fihn. “Nuclear weapons are banned."

Peter Maurer, president of the International Committee of the Red Cross, said, "Today is a victory for humanity”.

In the UK, the Peace Pledge Union is one of several organisations to have welcomed today's news. The PPU is a pacifist group is opposed to all war.

“The elimination of nuclear weapons is only one part of the struggle to overcome war, but it's a particularly important one,” said PPU Campaigns Manager Symon Hill.

He added, “This treaty has come about thanks to the efforts of millions of people working in grassroots movements around the world. It's a reminder of what can be achieved when people work together at the grassroots in resistance to injustice and militarism.”

The PPU urged people in the UK and other nuclear-armed states to work together to put pressure on their governments to respect the international agreement and ditch nuclear weapons.