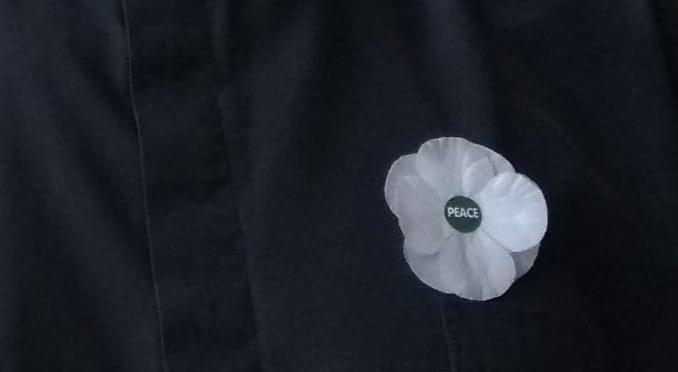 Conservative MP Johnny Mercer is facing criticism after encouraging people to "ignore" white poppy wearers and appearing to display ignorance of the history of white poppies.

On Twitter last night (22 October), Mercer wrote, "White poppies are attention seeking rubbish. Ignore the wearers of them. If you don’t want to wear a poppy don’t bother; they fought and died so you could choose. But don’t deliberately try and hijack it’s symbolism for your own ends."

"We are not hijacking anything," said Symon Hill of the PPU. "White poppies were founded in 1933 by women who had lost loved ones in World War One and who felt that the red poppy was moving away from the original message of 'never again'."

Bernadette Meaden, one of the first to challenge Mercer's remarks, drew attention to the fact that white poppies were founded by the Women's Co-operative Guild in 1933. She asked, "Do you think those women, whose lives were so devastated by WW1, were mere attention seekers?"

Another Twitter user, tweeting as @FoodFashFit, wrote, "This is really unfair. My late mother in law wore a white poppy because her father was a conscientious objector in the war - he didn't fight but he was medical personnel."

The British Legion, who produce red poppies, argue that Remembrance should be concerned solely with British and allied armed forces personnnel. White poppies represent remembrance for all victims of war, a commitment to peace and a rejection of militaristic attempts to glamorise or sanitise war.

Quaker writer Rhiannon Grant responded to Mercer, "My white poppy is attention seeking - it seeks to draw attention to [the] way red poppies, and remembrance practices more generally, are used to justify ongoing violence. It remembers all victims and why war is bad. It says 'never again'."

Also on Twitter, disability campaigner Chris John Ball accused Mercer himself of being an "attention-seeker", adding "If Johnny cared about ex military he would not vote the way he does on social security matters".

White poppies can be purchased online from the Peace Pledge Union or from a number of shop, cafes and other outlets in various parts of the UK.

White poppy wreaths will be laid at an Alternative Remembrance Sunday Ceremony in London on 11 November, and at similar events elsewhere in the UK.