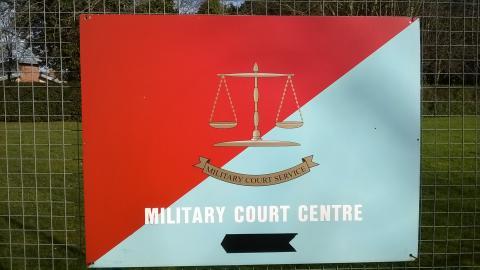 The army leadership and the Ministry of "Defence" have been accused of dodging the law over the deaths of three army reservists on a training exercise in the Brecon Beacons.

Clearing two SAS soldiers of negligence, a judge this week made clear that the failings were higher up in the chain of command - but no senior soldiers will face prosecution and the Ministry of "Defence" (MoD) is exempt from being charged.

The Peace Pledge Union (PPU) said it was the latest example of the MoD and armed forces being treated as if they were above the law.

A court-martial in Bulford, Wiltshire, this week cleared two SAS soldiers - known only as "1a", a junior officer, and "1b", a warrant officer - of negligence in relation to the deaths - becuase they had received insufficient training and the decisions had been made by more senior officers.

The judge, Jeff Blackett, told the court-martial in Bulford, Wiltshire, that "the deaths occurred because of the systemic failures within Joint Forces Command". He said the defendants lacked "even the most basic of training in relation to heat illness and risk assessment".

It emerged that the defendants had tried to change the training exercise but had been overruled.

The Ministry of "Defence" cannot be charged because of legal privileges that exempt the MoD from prosecution for corporate manslaughter or even health and safety breaches.

There are growing calls to change the law so that the MoD can be prosecuted. MPs backing a change in the law now include Madeleine Moon, MP for Bridgend and a member of the Defence Select Committee.

But the Peace Pledge Union said it was just one of the many changes that were needed.

"This is a sadly familiar pattern," said PPU spokesperson Symon Hill. "People die, somebody relatively junior is blamed and the army leadership and MoD get off completely free. The armed forces' failure to take responsibility once again shows up the army leadership's disregard for the value of human life."

The PPU has long called for all such trials to take place in civilian courts, pointing out that the armed forces are the only organisations in the UK that are allowed to conduct their own criminal trials.

This is the second time this year that an acquittal in a military court has exposed alarming practices in the army as a whole. In March, the trial collapsed of 16 army instructors accused of abusing teenage recruits, after it was revealed that the Royal Military Police had made no arrests until two years after receiving dozens of allegations of abuse.

The army claimed this week that they had improved safety procedures for training exercises, but an inspector for the Health and Safety Executive, Sarah Baldwin-Jones, told the court that the army still provides no guidlines to trainers on the sort of situation that led to the deaths of the three reservists in 2013.