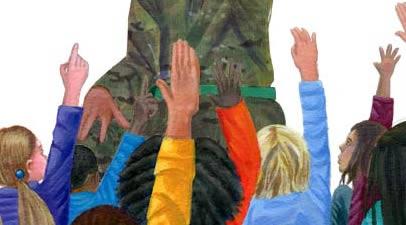 The Peace Pledge Union has condemned the latest example of militarism in education after a newspaper reported on the Ministry of Defence running lessons in a primary school.

However, the PPU pointed out that it was only one example among many of armed forces and arms companies being allowed to influence young people through schools.

The Morning Star reported today (3 January 2018) on the activities of apprentices from Defence Equipment & Support (DE&S), a unit of the Ministry of Defence that deals with arms manufacture and procurement. They pointed to the DE&S magazine, Desider, which has reported that DE&S apprentices have run a week of lessons at Riverside Primary School in the Devonpot area of Plymouth. Devonport is rated as one of the most deprived places in the UK.

This is not the first time that promotion of STEM subjects has been used as an excuse for military involvement in education. The Royal Air Force and BAE Systems have been running STEM events in schools for some years.

The PPU said that whatever the content of the teaching, these initiatives give children the impression that the use of science and technology for warfare is legitimate and uncontroversial. They insisted that young people should be able to hear a range of views and perspectives and make up their own minds about complex ethical and political issues as they grow up.

The Peace Pledge Union is hearing increasingly often from parents, young people and teachers who are alarmed about militarism in schools. The UK government is putting millions into military projects in schools just as other youth and education services are being cut.

If you're a school student, parent or teacher concerned about militarism in your school or community, please get in touch and let us know. You can email coordinator@ppu.org.uk or call 020 7424 9444.