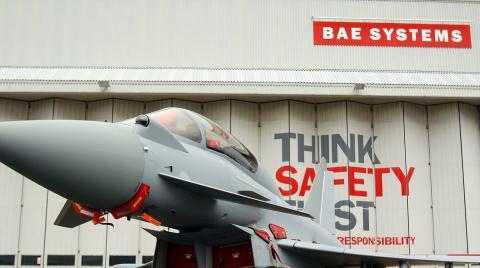 British Bake Off star Nadiya Hussain is facing calls to pull out of a careers event for young people sponsored by multinational arms firm BAE Systems.

The World Skills UK Live event will take place online from today until Saturday (26-28 November), with Nadiya Hussain due to speak on Saturday. Young members of the Peace Pledge Union (PPU) are urging Nadiya to cancel her planned speech at the event.

The event is portrayed as a general careers event for young people, with “talks on careers, apprenticeships and excellence”. But 10 of the 24 sessions are about careers in the military or the arms industry, with no other industry offering more than one session.

BAE Systems is the lead sponsor, with the other eight sponsors including the army, navy, RAF and the arms company Leonardo.

The Peace Pledge Union described the event as an example of everyday militarism, whereby military organisations and attitudes creep into ever more areas of civilian life.

Anya Nanning Ramamurthy, a 19-year-old PPU member, has written to Nadiya Hussain, pointing out the content of this event and BAE's record in fuelling war and arming human rights abusers. She suggests that it's possible that Nadiya has not appreciated the real nature of the event, given the way that it is misrepresented as a general careers conference.

The PPU suggests that by inviting a popular and respected figure such as Nadiya Hussain, BAE are trying to present the arms trade as normal and ethical.

They also questioned why World Skills UK, a charity that receives funding from the Department for Education, is accepting sponsorship from arms dealers and hosting an event focused on arms-related careers.

“I'm writing as a young member of Peace Pledge Union who is currently exploring what career paths I could take," wrote Anya Nanning Ramamurthy in her letter to Nadiya Hussain. "The fact that BAE is sponsoring an event which is meant to support children and young people to explore where their future could go, is, for me, abhorrent."

Anya contrasted Nadiya Hussain's own work on young people's wellbeing with the work of BAE Systems, which is supplying weapons used by Saudi forces in bombing children in Yemen. The Saudi forces are trained by British troops.

She wrote, “I know that you care a lot about the development and care of young people and their wellbeing. Your book My Monster and Me is beautiful at demonstrating this and supporting many to have discussions around wellbeing. I’m sure you’d agree that these beliefs and morals are not compatible with BAE’s work and the destruction it causes."

Anya concluded, "I am calling on you to step back from this event, please.”

Anya and the Peace Pledge Union are awaiting a response from Nadiya Hussain.

In the meantime, the PPU's younger members and their allies will be taking to social media to draw attention to the real nature of World Skills UK Live and challenging the claims made by the arms companies and armed forces as they use the event to promote recruitment.

"Events such as this involve two types of recruitment," said PPU Campaigns Manager Symon Hill. "They recruit a number of people to the armed forces and arms companies, and they recruit a much larger number of people to a pro-military, pro-arms trade mindset. The Peace Pledge Union is right behind our younger members who are challening this outrageous example of everyday militarism."

You can read the whole of Anya Nanning Ramamurthy's letter to Nadiya Hussain here.

Want to join the campaign on social media? You could: