No-deal Brexit: Troops must not be used for social control 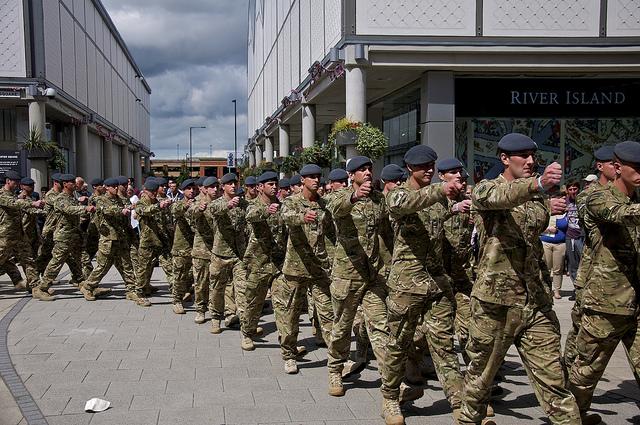 No-deal Brexit: Troops must not be used for social control

UK Defence Secretary Gavin Williamson has said that 3,500 UK armed forces personnel are on stand-by to deal with a no-deal Brexit.

But the Peace Pledge Union (PPU), a longstanding British pacifist network, called on Williamson to rule out the use of troops for social control in the event of civil unrest.

The PPU pointed out that under British law, troops have no authority over civilians unless martial law is declared, including no power to carry out arrests. The PPU encouraged people not to accept the authority of armed forces over civilian life.

In the Commons at around 2.00pm today, Tory MP Will Quince asked the Defence Secretary about the use of armed forces in the event of a no-deal Brexit.

Gavin Williamson said, “What we are doing is putting contingency plans in place, and what we will do is have 3,500 service personnel held at readiness, including regulars and reserves, in order to support any government department on any contingencies they may need.”

The question followed Williamson's presentation of the "modernising defence" review, during which he called for an extra £340m for the Ministry of Defence, in addition to the extra £1bn recently granted.

“Both leavers and remainers emphasise their belief in democracy," said PPU spokesperson Symon Hill. "Democracy is not about controlling people through the barrel of a gun. Sending troops onto the streets is no alternative to listening to people's grievances."

He added, “Gavin Williamson may be thinking in terms of using troops to distribute food and medicines in the event of a breakdown of supplies. If this is what he means, he needs to say so. These tasks could be better handled by civilian emergency services if they received the extra funding that Williamson is demanding for the armed forces. The chaos over Brexit must not be misused to present the armed forces as the only people who can save us in a crisis.”

(Photo credit: The above photograph was taken by Martin Pettitt and is used with thanks under a Creative Commons Licence).