Our solidarity must be real, say pacifist activists 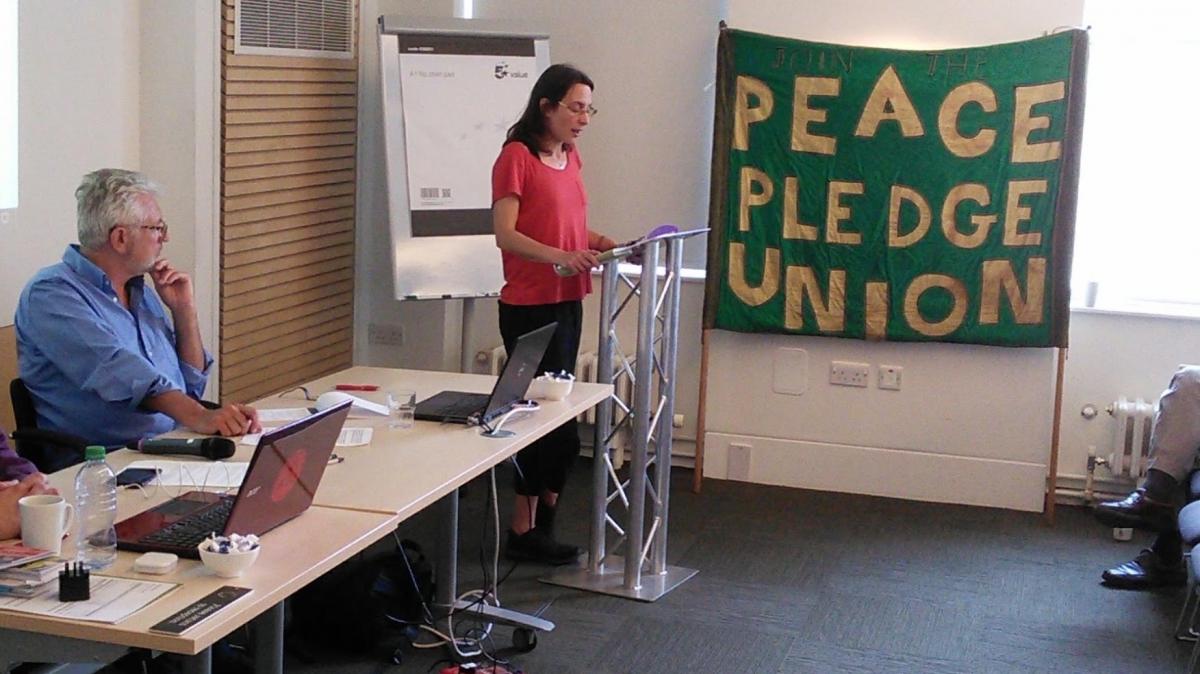 Our solidarity must be real, say pacifist activists

Peace Pledge Union members have challenged themselves to ensure that they live up to their values within their own organisation, and act in solidarity with people around the world.

Members of the PPU came from around the UK for their Annual General Meeting (AGM) in London on 1st June 2019, followed by a conference entitled Local to Global: Solidarity for Peace.

At the AGM, PPU members voted to review PPU structures and practices with the aim of ensuring that we follow the same principles of pacifism and nonviolence in our own work as we call for in the world. At the conference, participants explored what solidarity means in practice and how to act in their own communities in ways that adapt national or international campaigns to local contexts.

Speakers included Melanie Strickland, one of the Stansted 15 who has been involved for years in nonviolent activism for peace, climate and human rights (pictured above).

Melanie spoke of how she and her comrades had taken direct action at Stansted airport in solidarity with people who were about to be deported. PPU members applauded after she explained how she had been in touch with individuals whose deportation had been prevented by the flight, and who had subsequently been granted leave to remain in the UK.

Melanie emphasised the need to offer meaningful solidarity and support to others, rather than trying to "save" them from the outside.

A panel debate included contributions from longstanding peace activist Maya Evans, who has campaigned in her own community in Hastings while also travelling to Kabul to support Afghan pacifists. Other panellists included Richard Barnard, a PPU member who was recently arrested while taking part in an Extinction Rebellion protest on the Docklands Light Railway. They were joined by Rachel Melly, pacifist and LGBTQ rights campaigner from York who has been challenging attempts by arms companies and armed forces to present themselves as supportive of human rights.

Among other topics, there was discussion about the relationship between the peace and environmental movements and how PPU should respond to Extinction Rebellion and the school climate strikes. Richard said he would like Extinction Rebellion to be more aware of peace and poverty, while encouraging the peace movement to take more account of climate change activism.

The AGM voted to welcome recent changes in the PPU's ways of working, including a non-hierarchical management structure and the adoption of a new Equality & Respect Policy. The meeting voted to mandate PPU's elected Council to carry out a review of PPU structures and to report back on a plan for the implementation of the Equality & Respect policy.

The AGM also passed a resolution proposed by former staff members Sophie Morrison and Ben Copsey, requesting that "active steps are taken by Council to engage those most directly impacted by the war machine, to ensure their voices and experiences are centred in our war resistance".

At the beginning of the day, the assembled members held a minute's silence in memory of Annie Bebington, who served on the PPU staff for 32 years and sadly died in April. Several members were visibly emotional as PPU Chair Albert Beale spoke of Annie's important contribution to the Peace Pledge Union over many years.

PPU Council also expressed thanks to other staff who have left in the last year: Jan Melichar, Sophie Morrison and Sarah Robinson, along with temporary white poppy asisstant Sam Gibbons. The many volunteers whose work has been invaluable to the PPU over the last year were also thanked.

In the democratic traditions of the PPU, the result of elections for officers and Council members were announced. Albert Beale was re-elected Chair with 63 votes, to 50 votes for Peter Glasgow.

Bill Hetherington was re-elected unopposed as Treasurer. Others elected to PPU Council were John Andrews, Lucy Beck, Amy Clark-Bryan, Peter Glasgow and Chris Henderson. Meanwhile, Hilary Cornish was thanked for her service, as she stepped down from Council after two years in which she has been extremely active.

At the end of the day, participants split into regional groups to discuss ways of taking action for peace in their own areas, in solidarity with other PPU members and supporters across the UK and with people around the world.

If you would like to join in PPU's campaigns or have questions about the AGM or conference, please feel free to get in touch on 020 7424 9444 or at mail@ppu.org.uk.