Outrage as British soldier arrested for protesting against war in Yemen 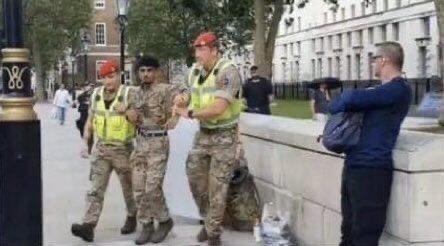 Outrage as British soldier arrested for protesting against war in Yemen

Pacifists have demanded the release of a British soldier arrested for peacefully protesting about the war in Yemen.

The soldier, understood to be Lance Corporal Ahmed Al-Babati of the Royal Signals, stood near Downing Street with a placard yesterday to object to the provision of arms and military training to Saudi Arabia by the UK government and armed forces.

Footage posted on social media shows him being arrested and led away by two Royal Military Police personnel.

The Peace Pledge Union (PPU) today described the arrest as an outrageous assault on democracy and free expression. They added that it undermined any claim that the armed forces exist to defend democracy and human rights.

Details of the event remain sketchy and the PPU has called on the Ministry of Defence (MoD) and army leadership to make clear the grounds of Al-Babati's arrest and state whether he is still in custody and whether he has been charged with a crime.

In a video recorded before the event, and posted on social media, Ahmed Al-Babati said he could no longer continue to serve in the UK army given British military support for the Saudi bombing of Yemen. Aware that he might be arrested, he stated, "I'd rather sleep peacefully in a cell than stay silent for a pay cheque."

According to Amnesty International, around 20,000 people have died in the war in Yemen since 2015 and 16 million Yemenis are going hungry. The United Nations has stated that Saudi forces have deliberately attacked civilian targets such as schools and hospitals.

"Three cheers for Ahmed Al-Babati!" said PPU Campaigns Manager Symon Hill. "Ahmed's integrity and courage contrast with the knee-jerk viciousness of the military response. Supporters of the armed forces like to tell us that they protect democracy and human rights. In reality, the British armed forces are helping Saudi forces to attack civilians in Yemen, and they have now made clear that they won't even respect the human rights of their own personnel."

He added, "Britain must not be a country in which people are arrested for protesting against war."

The PPU called for immediate clarification over what has happened for Ahmed Al-Babati, and for his immediate release if he is in custody. They promised him their solidarity if he faces a court-martial

The PPU reiterated calls for an end to British support for Saudi forces and for a ceasefire by all parties in Yemen.

The PPU has begun the hashtag #JusticeforAhmed on social media.