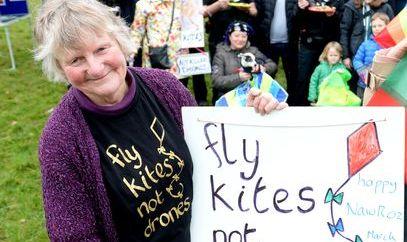 Penny Walker, who was at the centre of many peace and human rights campaigns in the Midlands, has died at the age of 70.

Penny's death triggered a flood of tributes from peace groups and refugee rights campaigners. She founded the Coventry Refugee and Migrant Centre and was later one of the most active members of Leicester for Peace. She also belonged to the Peace Pledge Union (PPU).

Peace campaigners young and old have described how they were inspired by Penny Walker.

“Every project Penny started was ahead of popularity, but each would be mainstream eventually,” said Richard Johnson of Leicester CND.

Sabir Zazai, chief executive of the Scottish Refugee Council, said, “Penny was a living reflection of peace and reconciliation”. Sabir was helped by Penny when he arrived in Coventry from Afghanistan to seek asylum in 1999.

Recently, Penny played a major role in the successful campaign to persuade the local authorities in Leicester to ban the armed forces from inviting children to handle weapons when they stage events and recruitment stalls in the city.

In 1997, Penny spent a year living in a caravan outside the Alvis tank factory in Coventry (now part of BAE Systems) as a witness for nonviolence and to promote alternative uses of technology.

Penny later co-founded Coventry Peace House. In the early 2000s, she set up Coventry Refugee and Migrant Centre in the Hillfields area of the city, which has since provided support to over 4,000 people.

Penny moved to Leicester in 2011, playing a major role in the community of South Highfields. Along with others, she organised the creation of a memorial to local conscientious objectors in Leicester's Peace Walk in 2016. She edited a booklet on examples of peacemaking, focused on everyday personal stories.

Among other activities, Penny was arrested while campaigning against war in Afghanistan, co-founded the Fly Kites Not Drones campaign, worked with the Afghan community in Leicester and challenged the recruitment of 16-year-olds to the UK armed forces.

Leicester for Peace held an outdoor event to remember and celebrate Penny's life at the Clock Tower in Leicester City Centre, where Penny had so often been seen campaigning for peace.

Brenda Worrall, another peace activist in Leicester, told the Leicester Mercury, “She was an amazing organiser and creator of ingenious ways to engage people in her campaigns. She respected everyone she met and everyone respected her. I will miss her so much and will do my very best to continue working for peace in Leicester in her memory."

“The peace movement won't be the same without Penny Walker,” said Symon Hill of the Peace Pledge Union. “The world has lost an inspirational activist, but she leaves behind thousands of people who have benefited from her work, including many people who she has enthused and equipped to keep campaigning for peace and human rights.”

Penny Walker died on 21 May 2021, 15 months after being diagnosed with cancer. She is survived by her children Mel Read and Charlie Walker and grandchildren Brooke and Lilly Read.