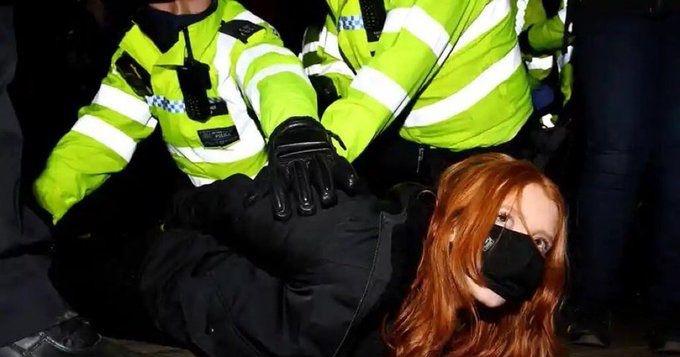 The Peace Pledge Union has urged MPs to vote against the new Police Bill that is being debated in the Commons today.

They described the Police, Crime, Sentencing and Courts Bill as an assault on basic rights to free expression and freedom to protest. The Peace Pledge Union insisted that the police already have too many powers to restrict protest and that such powers are frequently abused by the police.

The debate in Parliament comes only days after police misused Covid legislation to justify violent attacks on women holding a vigil on Clapham Common in memory of victims of violence against women (pictured).

The bill offers the police swingeing new powers to restrict peaceful protests, allowing them to specify start times, end times and noise levels at static protests. This has previously been the case only for marches. The bill also introduces new measures against Traveller communities.

Hundreds of campaigning organisations and charities have criticised the bill's restrictions on the right to protest and the extra powers it gives to the police. Critics include Liberty and Netpol (the Network for Police Monitoring).

The Home Office said the bill would restrict protests that “stop people from getting on with their daily lives”.

But the Peace Pledge Union pointed out that if somebody’s daily life involves – for example - running an arms company, then this is a licence to restrict protests against the arms trade.

The PPU said that the bill is another step in the militarisation of the police and a sign of the spread of everyday militarism in the UK.

“The rights we have in law have not been graciously handed down to us by the rich and powerful,” said PPU Campaigns Manager Symon Hill. “We have these rights because our ancestors campaigned for them. Our rights to engage in nonviolent activism must be constantly exercised, and defended from those who want to protect the powerful from criticism.”