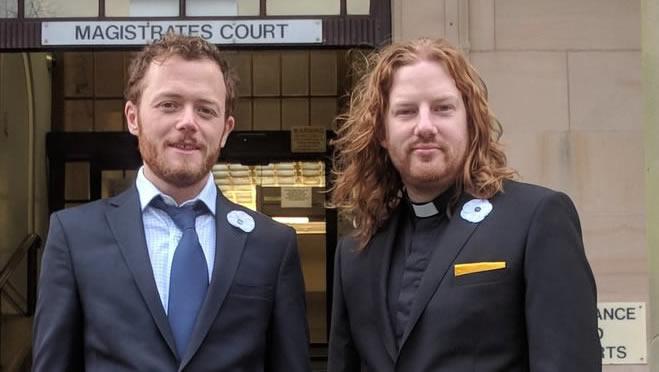 Two members of the Peace Pledge Union have been declared Not Guilty of criminal damage after a court heard how they were attempting to disarm warplanes bound for Saudi use in Yemen.

Sam Walton and Dan Woodhouse entered the BAE Systems base in Warton, Lancashire in January 2017 to disarm warplanes that were due to be sold to the Saudi government. Although they were stopped just before they reached the planes, they were charged with criminal damage relating to the fences and doors they had broken through to enter the base.

Delivering his verdict at Burnley Magistrates’ Court on 26 October, district judge James Clarke said he had heard Sam and Dan’s “beliefs regarding the events in Yemen, that they include the death of civilians and the destruction of civilian property, and the basis for their belief that this amounted to war crimes”.

Sam and Dan made the case that the law allows the use of resonable force to prevent crime and protect property.

The judge stressed that he was not ruling on whether Saudi Arabia had committed war crimes in Yemen, but he accepted that the defendants had a reasonable belief that this was the case.

He concluded, “Having considered in full the defence under Section 5 of the Criminal Damage Act 1971, I find the defen- dants not guilty”.

While James Clarke insisted that his judgement does not set a precedent, the ruling came as an embarrassment to BAE Systems, the UK government and Saudi Arabia.

Only the day before, the then “Defence” Secretary Michael Fallon had said that criticism of Saudi Arabia in Britain “is not helpful” as he is trying to secure arms deals with the regime.

Sam and Dan had entered the base 21 years to the day after another group of activists disarmed a warplane bound for Indonesia on the same site. They too were acquitted.

Sam and Dan thanked the many people who sup- ported them during the trial. Thousands of people had sent supportive messages, including people in Yemen.