Rise in teachers concerned about armed forces in schools 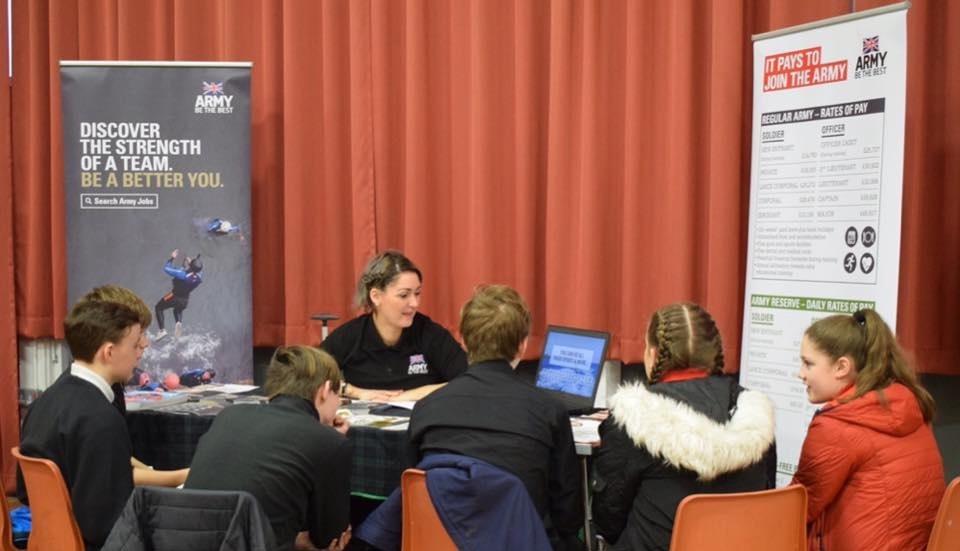 Rise in teachers concerned about armed forces in schools

The Peace Pledge Union has reported a significant increase in the number of teachers asking for advice about challenging militarism in schools.

The rise follows an increase in Army Cadet forces and “military ethos” programmes in schools, on which the UK government has spent over £95 million since 2012.

The Peace Pledge Union (PPU) made the comments after returning from the National Education Union (NEU) annual conference this week, which saw an increase in the number of teachers and teaching assistants approaching the PPU stand to express support and to ask for help.

The PPU’s survey of delegates at the conference this week found that over 80% said they “strongly agree” that any armed forces visits to schools should be balanced by an equal number of visits from organisations engaged in nonviolent conflict resolution or peace campaigns. Many said that armed forces visits to schools should not be allowed at all.

The UK government has spent over £45 million of taxpayers’ money since 2012 on projects with a “military ethos” for “disengaged” young people. They have put a further £50 million into the Cadet Expansion Programme, as a result of which the number of cadet forces in British state schools has more than doubled since 2012.

Several teachers told the PPU that they were angry that this has happened at the same time as other youth services have been cut and when the government has insisted that there is no money for many basic aspects of school funding.

Teachers who spoke with the PPU at the NEU conference included several who wanted to speak out against cadet forces in their school but were concerned about management reactions. Two had been told to work with a new Army Cadet unit in their school, despite their own objections. But another had successfully persuaded her headteacher to discontinue a “military ethos” programme in her primary school due to negative impacts on the children’s mental health.

“I think it’s really important to provide a balance," said Rachel Gregg, a teacher in Leeds and delegate at the NEU conference. "I’m really concerned about the unchallenged presence of the army in my school on Careers Day. They try to make it sound like an adventure. They don’t say anything about the fact that the people they recruit might end up dying and killing others. They almost try to manipulate young people into joining the military.”

The PPU has also been contacted by young people and parents, as well as teachers, who wish to challenge military presence in schools. Local campaigns against militarism in schools have taken off in several towns and cities, with some campaigns run by school students themselves.

The PPU regards militarism in schools as a particularly dangerous form of everyday militarism.

If you're concerned about militarism in your school or community, and would like support from the Peace Pledge Union, you can contact us at mail@ppu.org.uk or on 020 7424 9444.