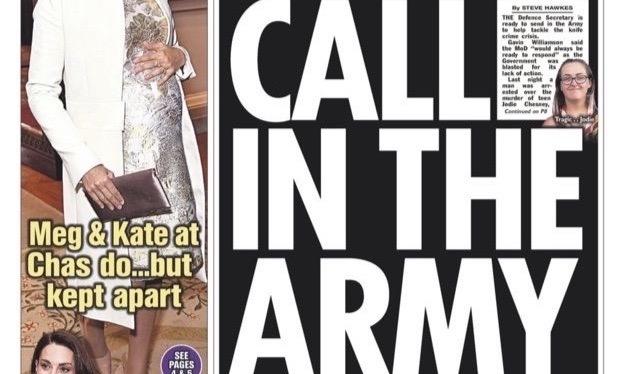 The Peace Pledge Union has said that deploying the army in an attempt to tackle knife crime will only make things worse.

Their comments follow reports that UK "Defence" Secretary Gavin Williamson has said that troops "would always be ready to respond" if called on to deal with knife crime. His predecessor Michael Fallon has also mentioned the possibility.

The suggestion gained more publicity this morning after The Sun ran a front page with the headline, "Call in the army".

It remains entirely unclear what either Williamson or The Sun expect troops to do that would reduce knife crime. The head of the Metropolitan Police, Cressida Dick, said she did not "exclude" the idea of using the army but insisted they should not "carry out police functions".

The news follows Gavin Williamson's statement that 3,500 troops are on standby to deal with "contingencies" caused by a no-deal Brexit. In response to questions from MPs and the Peace Pledge Union, the government has failed to rule out using troops for police functions or social control after Brexit, saying only that they currently have no plans to do so.

"As we mourn the victims of knife crime, the last thing we need is politicians trying to look tough while doing nothing effective to tackle the problem," said Symon Hill of the Peace Pledge Union. "You can't discourage people form turning to armed violence by suggesting that armed violence solves problems. This is far removed from the difficult and long-term work of tackling the root causes of knife crime."

He added, "In recent months, Gavin Williamson has offered troops to deal with Brexit, to tackle a tiny number of migrants crossing the channel in dinghies and now in response to knife crime. This appears to be the latest attempt to extend to military power into more and more areas of civilian life. We can have a democratic society or we can have a militarised society. We can't have both."