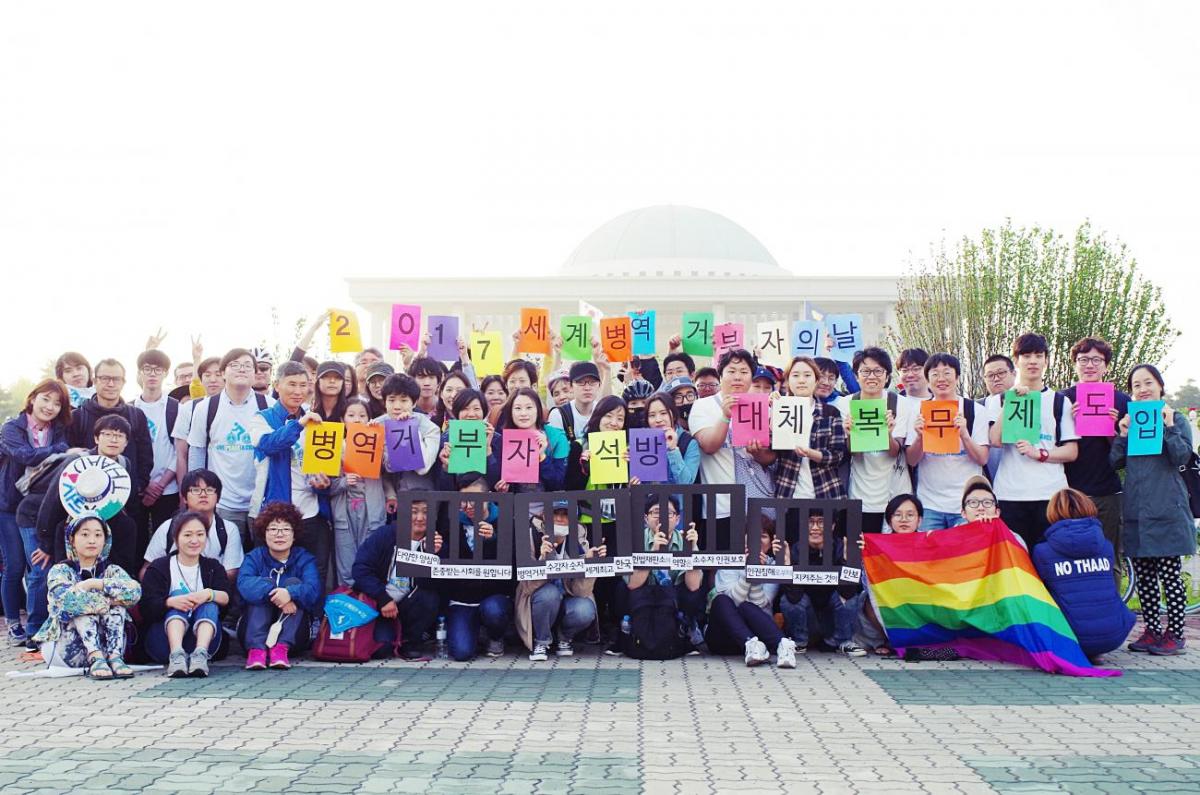 Ceremonies and protests have taken place around the world today (Tuesday 15 May) to call for the release of hundreds of people imprisoned in Korea for refusing to join the armed forces.

Despite recent moves towards peace in the region, over 250 conscientious objectors remain in prison in South Korea. The number in North Korea is not known.

In London, a ceremony in Tavistock Square to mark International Conscientious Objectors' Day (15 May) was followed by a visit to South Korea's embassy to hand in signatures urging South Korean president Moon Jae-in to act on his election promise of recognising the right to conscientious objection.

Elsewhere in the UK, opponents of conscription are collecting signatures for postcards to the South Korean government in cities including Edinburgh, Liverpool and Cambridge.

Other events are taking place in towns and cities including Bradford, Brighton, Manchester, Norwich, Sheffield and Swansea. Major protests are underway in South Korea itself, and in many other countries around the world. Conscription is still in force in over 60 countries, and has recently been reintroduced in Sweden.

The ceremony in central London was addressed by Eritrean human rights activist Selam Kidane, who campaigns against conscription in Ertirea. Hannah Brock of War Resisters' International read out a statement from South Korean conscientious objectors. White flowers were laid in memory of conscientious objectors past and present.

The ceremony was organised by a range of peace campaigns, human rights organisations and faith groups who make up the First World War Peace Forum. In marking the 100th anniversary of World War One, they insist that the efforts of conscientious objectors and other war resisters are as relevant as ever in a world in which war is commonplace and militaristic thinking still dominates.

"It is right that we campaign for the thousands of political prisoners in North Korea, but we should not forget the political prisoners in South Korea too - including over 250 young people locked up for refusing to take part in killing. The welcome thaw in relations on the Korean peninsula should lead to human rights receiving more attention, not less.

"On International Conscientious Objectors' Day, let's take inspiration from people who took a stand against militarism 100 years ago in World War One, and stand shoulder to shoulder with people opposing war around the world today, whether through conscientious objection, nonviolent direct action or other forms of resistance."

The ceremony in London is organised by the First World War Peace Forum. The Forum was established in 2014, bringing together peace and human rights groups concerned with the commemoration of the centenary of the First World War. Several of these groups trace their roots to peace movements in the First World War. The Forum's members include the Anglican Pacifist Fellowship, Conscience, the Fellowship of Reconciliation, the Movement for the Abolition of War, Network for Peace, Pax Christi, the Peace Pledge Union, Peace News, Quaker Peace & Social Witness, the Right to Refuse to Kill group and the Women's International League for Peace and Freedom.