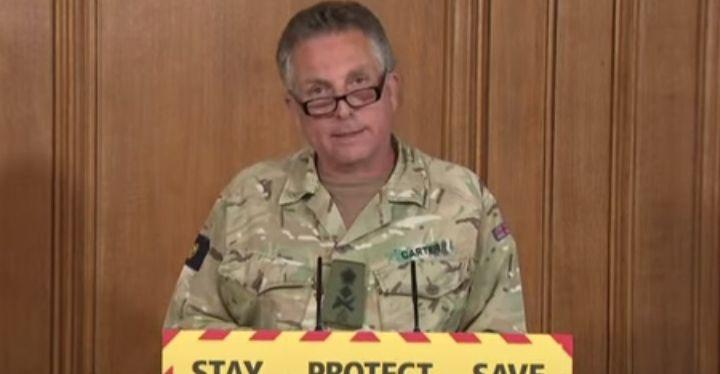 Carter, who as Chief of Defence Staff is head of the UK armed forces, addressed the government briefing yesterday alongside the Prime Minister's deputy, Dominc Raab, and the Chief Medical Officer, Chris Whitty.

It is very unusual for public or press briefings by the UK government to be addressed by military leaders.

Carter's presence at the briefing came on the same day that the Times ran an article based on quotes from an anonymous “senior army source”, suggesting that the armed forces should take over responsibility for logistics from the NHS.

Wearing combat fatigues, Carter talked mostly in vague terms about what UK armed forces “are doing in support of the government's response to the virus”.

He took the opportunity to mention his belief in “defending the homeland with the nuclear deterrent”.

But Phil Webber, chair of Scientists for Global Responsibility, asked why this issue was mentioned in what was supposed to be a briefing about coronavirus. He said that for Nick Carter “to 'remind' us how our 'nuclear deterrent' was keeping us safe was completely inappropriate and deeply misleading”.

Carter stated that between 3,000 and 4,000 UK armed forces personnel are involved in tackling the pandemic, through tasks such as delivering supplies and setting up test centres. He added that another 20,000 are on hand if needed.

The Peace Pledge Union (PPU) pointed out that the combined figure represents less than 12.5% of UK armed forces personnel, of whom there were 192,160 as of the beginning of this year.

The PPU emphasised their gratitude to all people delivering medical supplies and building hospitals, including military personnel, and said it was simply wrong to suggest that this is now the armed forces' main focus.

After discussing the military response to the pandemic, Carter added, “Despite all of this we are still involved of course in protecting the country”. The PPU said it was alarming that he does not seem to regard tackling a pandemic as a form of protection, but appears to see defence and protection purely as euphemisms for war and armed force.

Both the PPU and Scientists for Global Responsibility pointed out that the UK government has maintained the seventh highest military expenditure in the world while not being prepared for security threats such as pandemics. Government security reviews in 2010, 2015 and 2018 listed a pandemic as a likely and serious threat to security.

Earlier in the day, 19 charities and NGOs signed an open letter calling for military budgets and resources to be diverted to tackling coronavirus and related threats to human security. This has been a central aim of the PPU's Healthcare Not Warfare campaign.