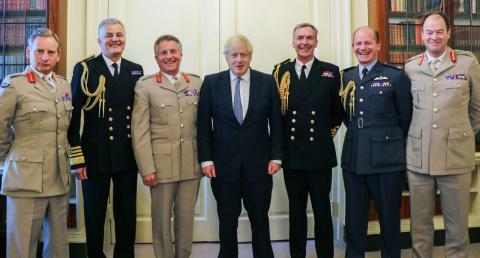 Despite underfunded health and social care services, the UK still has the second highest military spending of all 29 countries in NATO.

It reveals that the combined military spending of NATO countries is $1.092 trillion.

In response, the Peace Pledge Union condemned high levels of military expenditure at a time of global crisis when health and social care services are struggling to cope in the face of the Covid pandemic.

The report states that the UK has been the second highest military spender in the nuclear-armed alliance in every year that the report covers, second only to the USA.

This is far behind the USA's military spending, at $785bn, but is more than any of the other 27 countries in NATO. Germany, France and Italy are in third, fourth and fifth place respectively.

When considered as a percentage of GDP, the UK's military spending is in third place, slightly behind Greece.

Despite the high levels of military spending in the UK, there is a constant campaign from militarist politicians and commentators to give the impression that it is unusually low and to push for it to be increased.

The Peace Pledge Union (PPU) said that the “defence” budget could be better spent on things that really defend people and promote human security, such as tackling pandemics, poverty and climate change. This is the principle behind the PPU's Healthcare Not Warfare campaign, launched earlier this year.