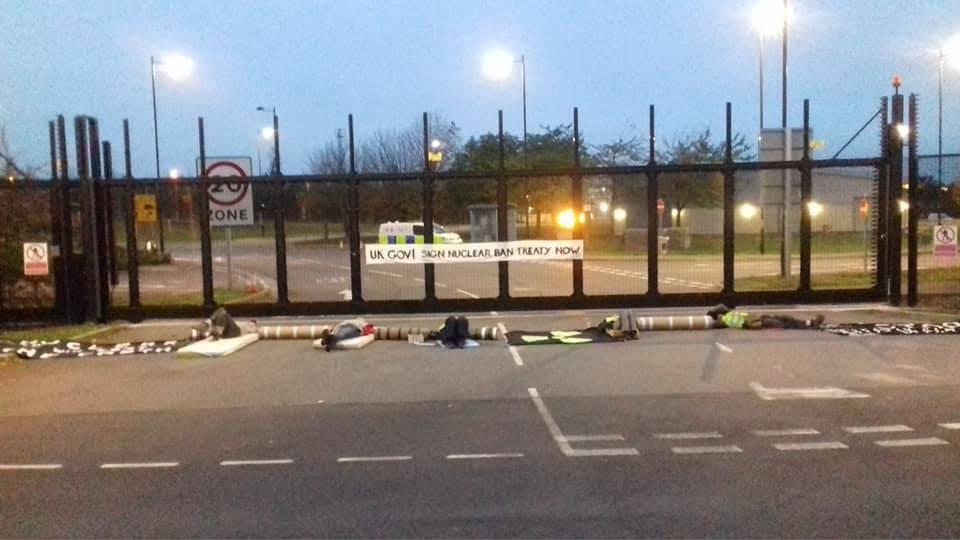 A site dedicated to the production of weapons of mass destruction has this morning been prevented from opening by people taking nonviolent direct action.

All gates were blocked this morning at the Atomic Weapons Establishment (AWE) in Burghfield, Berkshire by members of the group Trident Ploughshares. The AWE is used by the UK government to develop warheads for Trident nuclear missiles.

The main gates was blocked by five nonviolent activists who put their bodies in the way of violence by locking themselves together in front of the entrance.

The Mearings, which is a private road with access to the main gate of AWE Burghfield, was blocked at both ends by cars, each with two people locked to them.

News of the nonviolent blockade was welcomed this morning by the Peace Pledge Union (PPU) and other groups committed to peace and human rights.

Nuclear missiles are produced at the AWE sites of Burghfield and Aldermaston in Berkshire before being carried by road to the Trident submarine fleet in Scotland.

Trident Ploughshares pointed out that today, 24 October, marks 73 years since the birth of the United Nations. The UK government have failed to have anything to do with the new UN Treaty on the Prohibition of Nuclear Weapons.

“I’ve never been involved in an action like this before and it’s heartening and empowering to feel that something can be done,” said Jim Davies, a 70-year-old retired civil servant from Liverpool.

He added, “With the current United Nations treaty on the total banning of nuclear weapons gaining support, it is only a matter of time before the UK and other nuclear-armed nations will feel international pressure to join the rational global majority”.

The people taking nonviolent action - with support and assistance from others - have travelled from various parts of England, Wales and Scotland to impede the production of nuclear warheads at Burghfield.

With several of those involved being pacifists, the PPU pointed out the action is further evidence that pacifism is not passive.