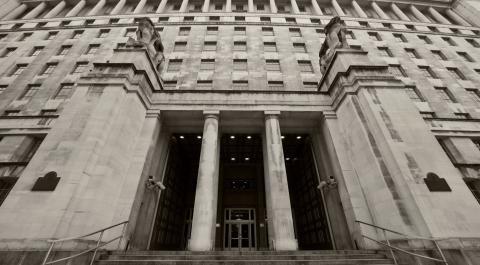 The PPU has said that changes in the law are urgently needed following revelations about cover-ups of war crimes.

According to investigations by the Sunday Times and BBC Panorama, war crimes that have been covered up include the widespread abuse of Iraqi prisoners in 2003 and the murder of unarmed children by an SAS soldier in Afghanistan in 2012. A senior SAS officer is alleged to have been involved in covering up this incident.

The Ministry of Defence (pictured above) is accused of having strongly discouraged prosecutions despite the evidence.

The PPU said that the armed forces must lose their power to run their own criminal trials, maintain their own police forces and make their own decisions about prosecutions. They insisted that soldiers and civilians should be subject to the same law and the same courts.

“What will it take for the armed forces to be held to account? They can run their own courts and police their own behaviour, in a way that would never be allowed for any other organisation. Criticisms of the armed forces are howled down by the militarist lobby, but in a democracy no institution should be beyond public scrutiny.

“At the Army Foundation College, where 16-year-old recruits are trained, there were 50 allegations of abuse and ill-treatment in three years. Now just as the militarist lobby is stirring up fantasies of a witch-hunt against veterans, the BBC and Sunday Times reveal high-level cover-ups of war crimes. For the sake of ill-treated teenage recruits, for the sake of civilians in Iraq and Afghanistan, and for the sake of British democracy, the armed forces must be held to account.”