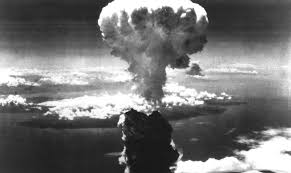 Members and allies of the Peace Pledge Union (PPU) will mark the day by mourning all victims of World War Two and speaking up about the need to resist war and work for just and lasting peace.

Sadly, the UK government and certain military groups are instead encouraging people to “celebrate” the day, which was known in 1945 as VJ Day (“Victory over Japan”).

Remembrance is important to the Peace Pledge Union. We seek to remember all victims of war, both civilians and armed forces personnel, of all nationalities.

The end of World War Two came after unimaginable suffering for people of many nationalities, including in Japan, China and the Pacific. The horrors included the appalling treatment of civilians in several parts of east Asia as well as the torture of British and other allied troops in Japanese prison camps. In one of the biggest atrocities of the war, over 300,000 Japanese civilians were killed when the US Air Force dropped nuclear bombs on the cities of Hiroshima and Nagasaki on 6th and 9th August 1945.

Remembering the horrors of war naturally leads us to work for peace and disarmament today.

Material produced by the UK government and certain military organisations encourages celebration of VJ Day without even mentioning the nuclear bombings. The PPU regards this as a shameful attempt to erase history and play down the horrors of war.

The government, armed forces and arms industry have an interest in ignoring the realities of war, particularly nuclear warfare, at a time when their Trident nuclear missile system is being renewed.

There are still people who seek to justify the massacres at Hiroshima and Nagasaki by arguing that more people would have died in a longer war if nuclear weapons had not been used. This is very likely inaccurate in itself: there were a number of signs that Japan was prepared to negotiate. This argument also reveals the chilling logic of war: a cold and callous calculation of numbers used by politicians and generals to justify the mass killing of children.

The Peace Pledge Union has developed a resource that describes the end of the Second World War from a range of perspectives. Aimed at secondary-age students, it explores the thoughts and feelings of different individuals at the end of the war, and encourages students to consider a plan for a peaceful future.

The resource can be found here: 'VJ Day' and the end of WW2

On 15th August, some PPU members will join in with local or online memorial events, services or periods of silent remembrance. Many will also join events and actions on 6th or 9th August to mark the 75th anniversary of the massacres at Hiroshima and Nagasaki.

You can find more information on the Events Page of the PPU website.

If you are organising an action or event, please let us know by emailing mail@ppu.org.uk or tagging us on Twitter at @PPUtoday.

Take a stand against war – sign the peace pledge and join the PPU!

This is a good moment to make a stand for peace. We invite you to sign the peace pledge - committing yourself to resisting war and the causes of war – and become a member of the Peace Pledge Union.