Recruitment of children to the military in Welsh schools 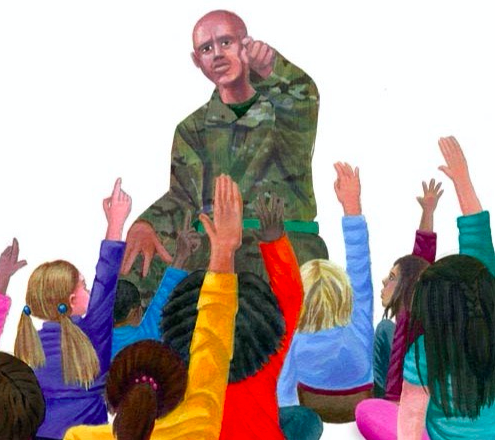 A briefing from Cymdeithas y Cymod, Forces Watch and the Peace Pledge Union in Wales

A new report by Cymdeithas y Cymod, ForcesWatch and the Peace Pledge Union examines the issue of military recruitment in schools in Wales – an issue steeped in controversy and on which the Welsh government made a series of commitments in a report published in June 20151, following a public petition submitted in 2012. As our report demonstrates, little tangible progress has been made against those commitments, yet military recruitment visits to Welsh schools have continued undiminished. With the Senedd elections due in May 2021, there is a unique opportunity for the next Welsh Government to embrace these challenges and to draw a line in the sand about Wales’ status as a peace-loving nation, and one which will not uncritically allow its children to be the target of military recruitment.

•Activities provided by the armed forces within schools are seen by the military as an important part of a pre-recruitment process that channels 16 and 17 year-olds towards a career in the armed forces. The relationship between armed forces activities in schools and recruitment has been noted by the UN Committee on the Rights of the Child2 and all four of the UK's Children's Commissioners3. If the Welsh Government is fully committed to implementing the UN Convention on the Rights of the Child, it must not only actively seek for the age of recruitment to be increased, but must also take action that is within its power to limit unregulated access to young people for recruitment activities.

•The UK is the only country in Europe that recruits 16-year-olds to its armed forces4 – a principle with which over 70% of people in Wales do not agree5. Academic research6,7,8 has demonstrated the worse health/ mental health outcomes for child recruits to the military.

•The advertising tactics associated with child recruitment are often based on misleading and inaccurate portrayals of military life9 whilst such advertising campaigns are frequently targeted at the UK’s poorest towns and cities10.

•Although the Ministry of Defence and the armed forces themselves claim that they do not carry out recruitment activities per se in schools, evidence11,12 suggests military activities in schools are a fig-leaf for recruiting pupils. Even if young people are not directly recruited to the armed forces, they are still “recruited” to pro-military attitudes, too often without hearing countervailing voices and arguments.

Recommendations for the Welsh government:

1) The evidence in this report should be used by the Welsh government to guide a formal review into military recruitment activities in Welsh schools.

2) Guidance should be issued to headteachers and careers teachers in relation to inviting the armed forces into schools to take account of their unique nature as a career and the need to encourage an open and honest exchange of views with learners about their role.

3) In line with the new Welsh curriculum, learners should be encouraged to approach presentations regarding prospective careers, including military marketing campaigns, with an open and inquiring mind, critically exploring the impact of potential career choices on their health and wellbeing as ethical, informed citizens of Wales and the world.

4) Child Rights Impact Assessments should be utilised to examine visits to schools and colleges by the armed forces for recruitment activities, and consideration should be given to introducing further oversight, regulation and guidance to support these.

5) The Welsh government should seriously consider the role of peace education programmes in supporting schools to enable learners to develop as healthy, confident individuals and ethical, informed citizens and assign some resources to supporting and developing these programmes in Welsh schools.

Recommendations for the Children’s and Future Generations Commissioners:

6) We ask the Future Generations Commissioner and the Children’s Commissioner to consider military recruitment activities in Welsh schools as an issue relating to children’s rights and wellbeing.

Recommendations for the armed forces:

7) The armed forces should proactively publish annual data on military visits to schools, with data on individual visits and collated by local authority, national and UK level. Doing so will allow much more robust analysis of the pattern of visits so that there can be clarity over whether, for example, visits are being targeted at disadvantaged areas.

Recommendations for the UK government:

8)The UK should raise the minimum age of armed forces recruitment to 18 in order to safeguard many of the most vulnerable recruits.