Thoughts of a Russian peace activist 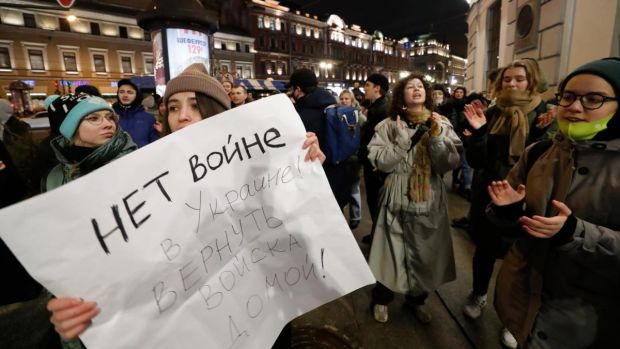 Ilya Kurtsev, a 20-year-old Russian pacifist, has been in touch with the Peace Pledge Union about protests in Russia against the war in Ukraine. Ilya offers solidarity to people in all countries who are challenging war and militarism. We are pleased that he supports the PPU's campaigns. He told us, "Your work against British government militarism is incredibly important".

Here, Ilya has written about the anti-war movement in Russia, along with his thoughts on why it is not stronger. This is his article.

Since the outbreak of hostilities in Ukraine, over 15,000 people have been detained at anti-war rallies in Russia, with a population of approximately 145 million.

It is easy to get the impression that Russian citizens wholeheartedly support the war launched by Putin in Ukraine, but this is not entirely true.

The low protest sentiment among the population is due to the fact that during the entire term of Putin's party in power, freedom of speech and the ability to

In addition to a term in prison or a large monetary fine, as stipulated by the law, a person who goes to a rally is ostracized by society. He may be despised by family, friends or colleagues at work, he may soon be fired from his job or expelled from university.

Collective responsibility is also an absolutely normal practice in Russia. This means that if a member of one family goes out to a rally or picket which condemns the actions of the authorities, it is likely that the punishment for his actions will extend to the whole family.

All these actions and laws directly contradict the structure of the Russian federation, but the authorities haven't bothered with this for a long time because Russia has long been an authoritarian police state.

In this regard it seems to me that protest moods in Russia are much higher, but people in 20 years of oppression by the authorities have become afraid for themselves and their loved ones.

Yet according to the "official" data 71% of Russians support the military action in Ukraine.

In my opinion, this unanimity may be due to several factors:

Still, if such conviction in the rightness of Russia's actions really exists, I can try to explain it by some other circumstances:

2) Education. As of 2019, only 31% of the population in Russia has a higher education. As a student, I can say that it is quite mediocre and not always in line with reality, and its practical relevance leaves much to be desired. Also, education in Russia is primarily based on constant rote learning and rote memorization, which breeds inertia of thought. And this is not the fault of ordinary citizens. For a long time Russia consciously reduced spending on education, and as you know, the lower the level of education, the less freedom, and the more blind faith the authorities have.

3) Limited sources of information. Most Russian citizens receive up-to-date information from television, and all channels on Russian television are subservient to the current powers-that-be. Thus all channels say only what they are allowed to say; what passes state censorship. It is the same with newspapers and magazines. Those who disagree are quickly shut down. Access to alternative sources of information is predominantly available to the younger generation of Russians, while the older generation is virtually doomed to receive information from the propagandistic Russian media.

4) The image of an external enemy. Throughout his rule, Putin and his government have worked actively to create hatred among the population towards the European Union and the United States. Throughout his entire period in power, the president of Russia has demonstrated pronounced anti-Western sentiments, which have been broadcast on Russian television. Thus, citizens have long had the perception that an imaginary Western adversary wants to take them over all the time. Eight years ago after the change of power in Ukraine, the Russian government created another external enemy because it was afraid of a similar scenario in Russia. Any thought of regime change terrifies the Russian government.

5) The cult of war and power. Throughout Putin's rule the celebration of "Victory Day", the official end of the war with Nazi Germany, on 9 May, has been actively promoted in Russia. In recent years, slogans about the horrors of war and fear of war have increasingly been replaced by the slogan "we can do it again". To repeat the worst catastrophe of the twentieth century. Even the thought of it is blasphemous, but for many it has become a way of life. Also in Russia any pacifist movement is greeted with ridicule and openly humiliated by young people who openly oppose military service. They often hear clichés like: "if you haven't served in the army, you're not a man", "what are you, a woman?", "only faggots don't serve", and so on.

The worst crime against humanity has been elevated to a cult, and the holiday devoted to the victims and heroes of the Second World War has been perverted.

6) Distorted historical memory and pan-Russianism. For many years there has been a perception in Russia that it has never attacked anyone in its entire history. Even at school children are taught that Russia has only fought in wars when attacked by external enemies and that Russia has always been peaceful and prosperous. This point of view looks so ridiculous, especially if one recalls that the Russian Empire in the best years of its existence occupied 1/6 of the whole Earth, that it is even embarrassing to hear such statements. Peacefully such territories are, to put it mildly, difficult to acquire.

Another problem of historical memory is pan-Russianism. Many people, including the president of Russia, are convinced that the Belarusians and the Ukrainians don't have their own history, national identity, language and culture. In the opinion of people who share these views, countries such as Belarus and Ukraine cannot exist as independent state entities, so the mission of Russia is to return the territories of these countries to the Russian Federation in order to restore "historical justice".

7) Trauma of the empire. The Russian Empire, at the time of its existence, occupied 1/6 of the surface of the Earth, and after its collapse, it lost vast territories, which became independent states. However, after a few years, all these territories were united under the USSR and the de facto empire continued to exist. After the collapse of the Soviet Union, Russia was again deprived of large territories and is now clearly trying to regain them. Its traumatic imperial past has prevented it from establishing itself as a normal democratic federation.

For a long time in history Russia was a key player in world politics, but today the realities have changed and Russia cannot accept that. The rulers of Russia are still convinced that their country should have a special position in the world.

8) The sacralisation of power. Probably the worst problem in contemporary Russia. The attitude of many Russians towards the authorities can be described as "Stockholm syndrome". Most citizens berate and complain one way or another about the officials and how they are pillaging the country (the arrests of Russian leaders' assets is a prime example of this), but the complaints are easily dismissed. In the minds of many ordinary citizens the officials seem to be demigods who can solve all problems.

These theses are just my opinions based on my observations of the world around me. I make no claim to their correctness, scientific validity or finality. I only wanted to at least somehow explain to myself why the citizens of Russia, who remember the experience of the traumatic world war, are not trying to stop the barbaric acts of their government today.

You can read statements here from various peace groups in Russia.

The Peace Pledge Union is Britain's leading pacifist campaign group and the British section of War Resisters' International. You can read more here about the PPU's response to the war in Ukraine.