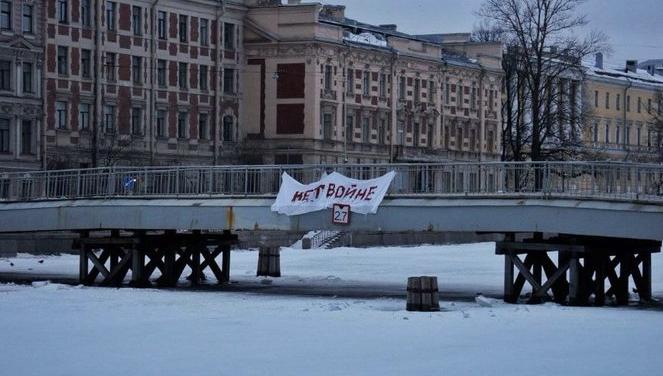 In response to this morning's news, the Peace Pledge Union has released the following statement.

The Peace Pledge Union condemns the Russian invasion of Ukraine. No excuses can serve to justify this murderous act of military aggression. Our thoughts are with people in Ukraine in the midst of this horror.

The Peace Pledge Union stands in solidarity with peace activists in Russia who are challenging the actions of the Russian government and armed forces. In recent days, peace campaigners in Moscow, St Petersburg and elsewhere in Russia have demonstrated against war with Ukraine, in some cases being arrested as a result. It is vital that their voices are not forgotten. We applaud any Russian soldiers who refuse to obey orders.

The PPU backs the democratic right to self-determination and we will not accept Russian control of Ukraine. Sending more weapons to Ukraine will only make the situation worse and the invasion is in any case unlikely to be defeated militarily. We are encouraged by the memory of Czechoslovakians who, in 1968, resisted Soviet invasion through mass non-co-operation, disrupting the invasion far more effectively and for far longer than would have been possible if they had relied on military means.

This appalling invasion comes thirty years after the apparent end of the Cold War. The Cold War ended because regimes in central and eastern Europe were brought down by the largely nonviolent resistance of their own people. But the opportunity to build peace was missed, as both Russia and NATO pursued aggressively militaristic policies. This has been seen in recent weeks with the refusal of both Putin’s government and NATO governments to engage in meaningful dialogue. The Russian invasion of Ukraine is the latest consequence of the failure over decades to work for peace.

Militarism and war cannot be defeated with more militarism and war. Ukrainian people who refuse to co-operate, and Russian peace activists resisting Putin, point the way to a solution that can only come about through the rejection of this invasion, and of all militarism, by people in Ukraine, Russia and around the world.

The Peace Pledge Union is the British section of War Resisters' International, which unites pacifists and anti-militarists around the world.