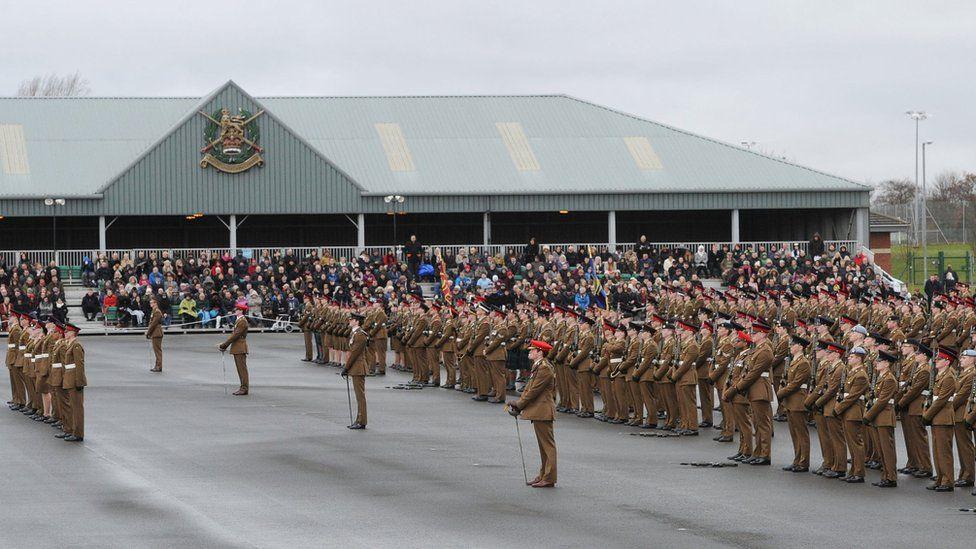 The research, carried out by Child Rights International Network (CRIN) and journalist Lara Whyte, focused on recruits aged 16 and 17. It revealed that more than one in ten young women aged 16 to 17 in the British army reported being sexually assaulted in 2021.

The figures are even higher than the already shocking sexual assault statistics that the Ministry of Defence had previously acknowledged.

Young women belgonging to the Peace Pledge Union (PPU), Britain's leading pacifist organisation, condemned the army's culture of abuse and said that victims' needs were being ignored. They called for the armed forces to lose the power to police themselves.

Defence minister Leo Docherty has admitted to Parliament that 37 young women and 10 young men (aged 16 or 17) made formal reports of sexual assault in the last year. Calculations by journalist Lara Whyte make clear that this number includes over a tenth of 16- and 17-year-old women belonging to the army at the time.

CRIN's research also revealed that three members of staff at the Army Foundation College in Harrogate have been accused of sexual assault within the last year. The College, where 16- and 17-year-old recruits are trained, has faced a string of scandals over the sexual, physical and emotional abuse of teenage recruits.

Lara Whyte and CRIN quoted a large number of former soldiers regarding their shocking experiences of abuse within the military. Many make clear that sexual abuse, particularly of young women, was routine and accepted in many parts of the army.

The UK government has so far rejected calls to ensure that all cases involving rape and sexual assault are tried in civilian courts. The law allows the armed forces to maintain their own courts and run their own criminal trials, despite the obvious conflict of interest when their own reputation is at stake.

MPs of many parties, including Conservatives, have called for all cases of rape and sexual assault to be tried in civilian courts.

The news come only days after BBC Panorama revealed evidence that military leaders had intervened to shut down investigations into the alleged killing of unarmed civilians by SAS "death squads" in Afghanistan.

The Peace Pledge Union (PPU), whose members include former armed forces personnel, have condemned armed forces as abusive institutions. They said that they harm their own recruits as well as civilians in countries in which they operate.

The PPU insisted that it was absurd to put the armed forces on a pedestal and applaud them, given the mounting evidence of their abusive nature.

The Peace Pledge Union is a collection of people who have pledged to reject war and to tackle the causes of war. We are the British section of War Resisters' International. Join us!