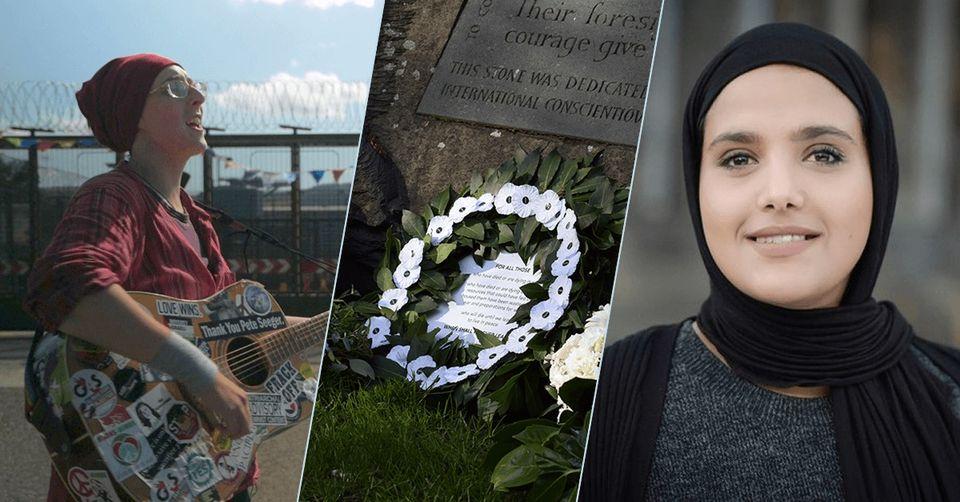 Hundreds of people today joined an online ceremony to remember all victims of war and to make a commitment to peace.

The National Alternative Remembrance Ceremony, organised by the Peace Pledge Union (PPU), was held online for the first time due to the Covid 19 pandemic. It included over 300 people from around the UK and beyond.

There were moving performances from Yemeni-Scouse poet Amina Atiq and Scottish singer-songwriter Penny Stone. There were many comments on social media from people saying they had been moved to tears by the performances.

The ceremony included two minutes' silence in remembrance of all victims of war, both civilian and military, of all nationalities.

There was also footage of white poppy wearers laying wreaths around Britain in the last few days, from Aldershot to Bridgend to Falkirk. In several places, wreaths were laid earlier this year, ahead of the lockdown in England. White poppies represent remembrance for all victims of war, a commitment to peace and a rejection of any attempt to celebrate war.

Amina Atiq said that if we really want to remember victims of past wars then we must work against war today. She performed two poems related to the war in Yemen and spoke passionately about the role of the British government and arms companies in fuelling the war by arming and training Saudi troops.

“Why is it that war in Yemen has not stopped?” asked Amina. “The answer is very simple. It's because of profit.”

She concluded, “We should all challenge war in all contexts”.

Historian Louise Raw was among those to tweet about Amina's “heartbreaking poem about Yemen's agony”.

Penny Stone performed a song consisting of words taken from Israeli soldiers speaking of the realities of war and their horror at what they had taken part in.

Many people took to social media to express their appreciation. “Hugely moving,” wrote one Twitter user, a sentiment echoed by several others. “Penny Stone and Amina Atiq, your contributions were so powerful,” added another.

The footage included the laying of a wreath of white poppies by the PPU's Anya Nanning Ramamurthy at the conscientious objectors' memorial stone in Tavistock Square, London, where the ceremony is usually held. Five PPU members had visited the square the day before lockdown to lay the wreath after observing two minutes' silence.

Footage from other locations included white poppy wreath-laying from Aldershot, Bridgend, Bury St Edmunds, Edinburgh, Falkirk, Hackney and Leicester. White poppy wearers in Leicester could be seen walking while socially distanced through driving rain to lay wreaths of white poppies. White poppy wreaths have also been laid in other towns and cities today.

After the ceremony, Penny Stone expressed her appreciation on Instagram, saying she was particularly glad to have seen the wreath-laying at the conscientious objectors' memorial stone. “I've sat there many times reflecting when I visit London, was good to see it so close up over the video. It's always helped me feel stronger somehow.”

The National Alternative Remembrance Ceremony, while organised by the Peace Pledge Union, was supported by organisations including the Fellowship of Reconciliation, the Edinburgh Peace and Justice Centre, Conscience, and Cymdeithas y Cymod.

Geoff Tibbs, the PPU's Remembrance Project Manager, thanked all those who had attended and encouraged them to continue to remember victims of war and work for peace.

“There are many ways to contribute,” said Geoff. “There's lots to get involved in.” He pointed out that this coming week is the International Week of Action Against the Militarisation of Youth, and encouraged people to watch out for updates on the PPU website or social media. “Hope to see you again soon,” he concluded.

You can watch the National Alternative Remembrance Ceremony here.

We are still sending out white poppies! They will be sent out first-class until 10th November. You can order them here.