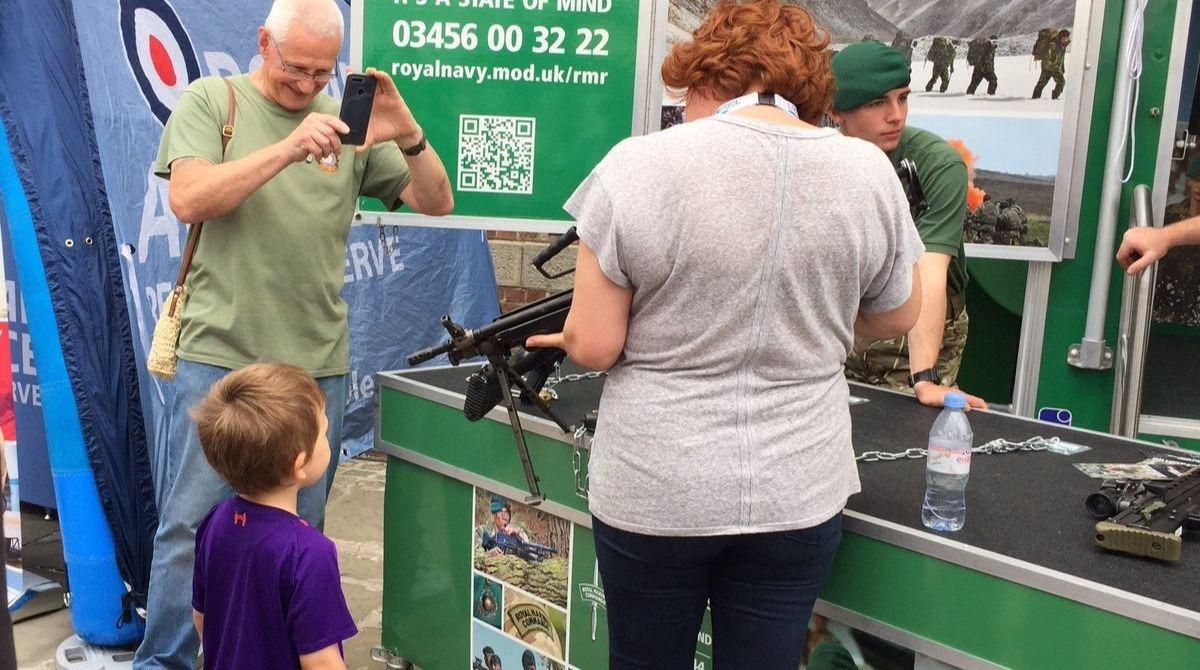 Armed Forces Day events around the UK have again seen children presented with a glamorised image of war.

But supporters of peace and human rights have been taking to the streets and to social media to express their outrage at everyday militarism and declare that “war is not family entertainment”.

The Armed Forces Day National Event in Salisbury, which was sponsored by at least eight arms companies, involved small children being invited to handle guns and dress up in equipment related to chemical warfare in the “military village”.

With no apparent sense of irony, the entrance to the venue warned participants that the rules of the venue included, “No alcohol, no weapons”.

Meanwhile, Salisbury Quakers held an alternative event in their Meeting House, offering information about issues of peace and war, showing films about militarism and providing free tea and cake to visitors.

The Peace Pledge Union (PPU) experienced a last-minute rush of requests for postcards challenging Armed Forces Day from people around Britain wanting to speak out against Armed Forces Day events in their own communities.

There were protests and vigils in towns from Letchworth and Bury St Edmunds to Stirling and Blackpool.

Others took to social media to express their horror after seeing Armed Forces Day events, many of them involving children.

In Liverpool, Hannah Larn tweeted that she was “absolutely furious” with Liverpool Council. She pointed out that the city was hosting an exhibition of works calling for disarmament at Tate Liverpool, but she had “to walk through #ArmedForcesDay to get there, and see children playing with guns”.

Matthew Guest, a sociologist at Durham University, responded to Hannah’s tweet by saying, “It’s time local councils showed some moral courage in standing against the trivialisation of violence and warfare on Britain’s streets”.

Veterans for Peace UK encouraged anyone seeing military personnel inviting children to handle weapons to “challenge organisers or the senior military person at the event”. They added, “Guns are not toys to be posed with for pictures”.

Forces Watch chose today to launch a web resource on “Kids With Guns”, pointing out the realities and horrors of children being invited to handle weapons.

The Peace Pledge Union have been sent several examples of children being militarised. One of these involves pre-school aged children. The PPU is verifying the details and will have more news on this shortly.

The photo above shows an Armed Forces Day event in Liverpool today. Thanks to Hannah Larn for the photograph.