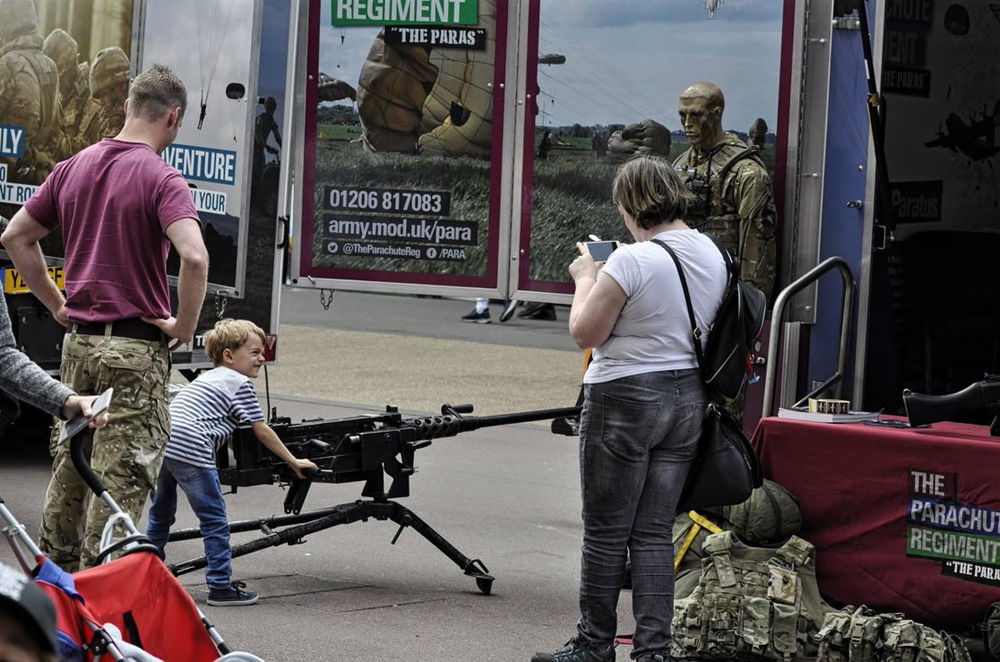 What is Armed Forces Day?

Armed Forces Day in the UK takes place each year on the last Saturday in June (since it was introduced in 2009). In 2022, it will be on Saturday 25 June.

The Peace Pledge Union is working with groups and individuals around the UK to challenge Armed Forces Day and to resist militarism with a Day of Action on 25 June.

The Armed Forces Day website lists over 150 parades and "fun days" around the UK, as well as the National Event in Scarborough (the National Event is held in a different town or city each year). More than a quarter of the events listed explicitly include elements aimed at children.

Armed Forces Day is also likely to be marked in schools, while the government and parts of the media will use the day to push strongly militaristic messages. Thankfully, there will also be protests and resistance, both online and in person.

Armed Forces Day was introduced in 2009, in the wake of widespread public criticism of the wars in Iraq and Afghanistan. With opposition to war on the rise, Armed Forces Day was one of several attempts to build up support for war by the back door - by promoting uncritical praise for the armed forces. Like the increase in cadet forces and "military ethos" programmes in schools, Armed Forces Day has fuelled the rise of militarism in everyday life in the UK.

Due to the Covid pandemic, there were few physical events to mark the day in 2020 and 2021, but they are now returning. In 2022, as in previous years, the Peace Pledge Union is working with people around the UK to challenge Armed Forces Day in their area.

1. Armed Forces Day presents children with a simplistic image of armed force as glamorous and fun.

Many Armed Forces Day events are aimed at children. Examples in 2022 include a "family fun day" in Eccles, a "community playday" at Vauxhall Barracks in Oxfordshire and a Junior Field Gun competition for schools in Portsmouth. Over a quarter of the events listed on the official Armed Forces Day website refer to children and young people.

Children are frequently invited to handle real weapons at Armed Forces Day events (an exception is Leicester, where the local authority banned the armed forces from doing this following a local campaign).  It is not uncommon to see children as young as seven handling weapons so big that they can barely reach the controls. In a particularly shocking incident in 2019, pre-school age children at a Lincolnshire nursery were invited to try on real military body armour by a visiting soldier. Children are not shown the effects of the weapons on the people they are used against. They are given the impression that weapons are basically toys and that using them is exciting. The Peace Pledge Union believes that war is not family entertainment.

People hold a range of views on the complex ethical and political issues around war and peace. But uncritical celebration of armed force gives children and young people the impression that such issues are not controversial and that everyone supports the armed forces. This is no better than presenting children with a biased view on any other political or ethical issue, such as Brexit, abortion or party politics.

3. Armed Forces Day prevents debate about the reality of the armed forces.

In a democracy, every public institution should be open to scrutiny. Uncritical celebrations such as Armed Forces Day add to an atmosphere in which the establishment and pro-military media will not countenance criticism of the armed forces as institutions. It is said in vague terms that the armed forces "keep us safe" or "fight for our freedom" but people who make these comments rarely explain how they do this.Most military actions of the last 20 years have been opposed by a majority of the British public, while the armed forces continue not to uphold freedom but to suppress it: for example, the Royal Air Force is training Saudi pilots, who are engaged in the targeted bombing of civilians in Yemen.

Militarists claim that the armed forces promote values of teamwork and self-discipline. We are in favour of young people learning such values, but doubt that they will come from the armed forces. Other values associated with the armed forces include the belief that violence is the ultimate solution to conflict and that the government should be supported whenever it declares war. Armed forces also upheld unquestioning obedience as something to be admired, rather than an assault on human dignity and conscience.

5. Armed forces are abusive institutions that should not be celebrated.

The armed forces target the poorest and most disadvantaged young people for recruitment. A series of leaks from the Ministry of Defence make clear that this is a deliberate strategy. An exception is the recruitment of officers, nearly half of whom have been privately educated (compared to 7% of the UK population as a whole). The armed forces perpetuate the power of the rich over the rest. Military recruits are brutalised through a process of military training before being sent to do violence against other poor people elsewhere in the world. They are often then dumped back into poverty when they leave the forces. Of the 290 young women aged 16 or 17 who joined the British army in 2021, ten of them reported that they had been raped or sexually assaulted before the end of the year. The Army Foundation College - where 16- and 17-year-old recruits are trained - received 62 formal allegations of abuse between 2014 and 2020. If that happened at a school, it would face being closed down. But the army is allowed to evade scrutiny, and carry on.

6. Armed Forces Day is not about helping veterans.

Supporters of Armed Forces Day talk up the need to help ex-forces personnel who may be experiencing poverty or ill health. It is true that there are some charitable events on Armed Forces Day and we are not discouraging anyone from giving to charity. However, these are a relatively minor part of Armed Forces Day. We believe that veterans should not have to rely on charity. Veterans, like everyone else, should be able to rely on a decent welfare state when times are tough. In reality, the UK government has been slashing the welfare state while maintaining the third highest military budget in the world.

7. For some, Armed Forces Day is compulsory.

With a number of schools now holding Armed Forces Day events, children and young people have little option but to participate. At the Peace Pledge Union, we hear from teachers who feel that they cannot refuse to go along with such things, and parents agonising over whether to keep their children off school on the day in question. We are delighted to hear from young people who are themselves campaigning against militarism in schools, but their freedom to object is limited.

8. Armed Forces Day is a misuse of taxpayers' money.

Arms companies are among the biggest sponsors of Armed Forces Day events. In 2019, for example, sponsors of the Armed Forces Day National Event, in Salisbury included at least eight arms companies. Businesses such as BAE Systems and Lockheed Martin, which contribute to death and destruction around the globe and arm some of the world's most aggressive regimes, are able to attract positive publicity through sponsoring Armed Forces Day. The amount of money they contribute is tiny by the standards of such powerful transnational corporations.

10. There are better things to celebrate!

When did your local council, school or community last celebrate nurses, firefighters, teachers, care workers or delivery drivers? Or the community as a whole? We are all in favour of building community, celebrating public service and running fun events for children and adults. This is what Armed Forces Day claims - but fails - to do. It is a celebration of armed force, and an attempt to put armed forces beyond criticism.

What can I do to resist Armed Forces Day?

We invite you to join our Day of Action on Armed Forces Day, 25 June 2022. There are many things you can do on or before the day: