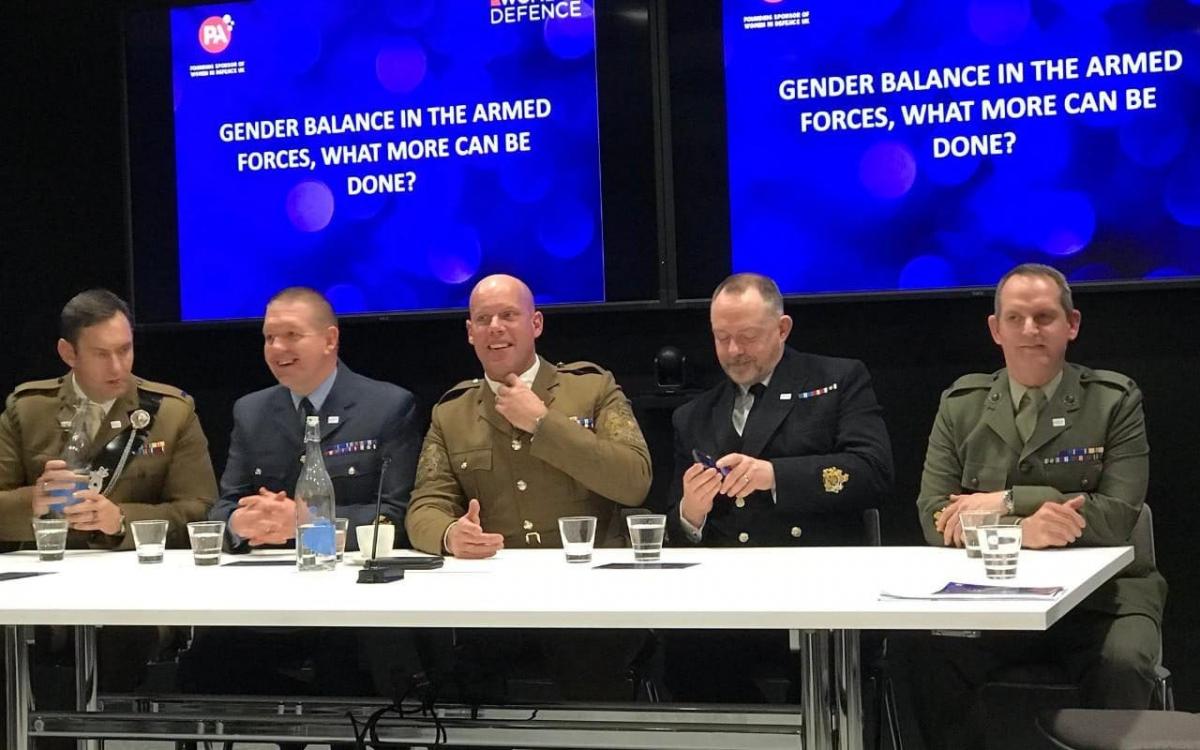 Senior members of the UK armed forces have been widely mocked for staging a debate on gender diversity - with an all-male panel.

The Peace Pledge Union (PPU) said it was the latest incident to show the hollowness of the armed forces' claim to be promoting equality and human rights. The PPU added that talk of recruiting more women into the armed forces is about failure to meet recruitment targets, not a commitment to feminism.

Apparently with no sense of irony, the panel posed under a screen reading, "Gender balance in the armed forces: What more can be done?".

Peace Pledge Union spokesperson Sarah Robinson said that the all-male panel “shows that only lip service is being paid to the inclusion of women in the military”.

But she added, “Having more women serving in senior roles in the the armed forces and arms companies will never be in the interests of women or wider society.  The military is deeply rooted in patriarchy, prizing ‘masculine’ values such as obedience to authority and hierarchy, and it reflects these back into society, reinforcing harmful gender norms.”

The panel was run by the group Women in Defence, an organisation for women working in the armed forces and the arms industry. Women in Defence is sponsored by the British army and Royal Air Force. Other "proud sponsors" include arms companies such as BAE Systems and Thales, complicit in the supply of weapons to some of the world's most despotic regimes and warzones.

Simon Fovargue, vice-president of DXC Technology, one of the sponsors, says that “diversity in the workforce… helps us to develop our competitive advantage”. This seems to be more about profit than human rights.

Dr Hilary Cornish, whose academic research focuses on the relationship between gender and armed forces, said, “It is always an awkward juxtaposition when the military try to portray themselves as progressive or even feminist.”

Dr Cornish, an elected member of the PPU Council, added, “Even if there was a will to address the barriers to women’s career progression in the armed forces, that wouldn’t change the devastating reality of the effects military action has on so many women globally.”

The PPU compared the attempts of the armed forces to appear supportive of feminism with their recent attempts to portray themselves as pro-LGBTQ.

This has led to Pride marches being led by soldiers marching in uniform and being sponsored by arms companies. In response, LGBTQ activists, along with the PPU and others, have formed ‘No Pride in War’ campaigns to challenge the notion that militarism is compatible with human rights.

The PPU's Sarah Robinson added, “The armed forces and arms companies who are seeking to benefit from this failed show of inclusivity are not just everyday run-of-the-mill organisations hosting a glitzy corporate awards ceremony.  Their business is war and the consequences of their business are death and devastation, with gendered effects upon women including the widespread use of rape as an instrument of war.”