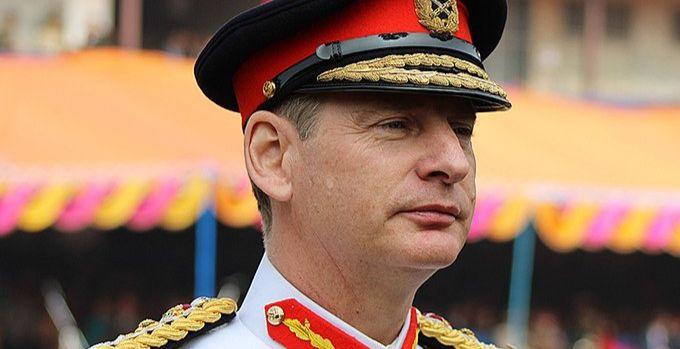 The head of the British army has admitted that the army are failing to "follow through" on their commitment to recruiting women.

The admission suggests that recent recruitment campaigns have been a failure. In recent years, they have made a priority of insisting that women are welcome in the armed forces.

Mark Carleton-Smith, Chief of the General Staff (pictured above), made the comments in a live Zoom interview today with the organisation Women in Defence.

The Peace Pledge Union (PPU) said that many women recognise that armed forces, rooted in warfare and obedience to authority, cannot promote feminism, equality or liberation.

The PPU also pointed to the British armed forces' role in training and supporting misogynistic regimes such as Saudi Arabia. They encouraged people of all genders to reject armed forces.

In his interview, Carleton-Smith said, “We're seeing a growth in the numbers of young women showing an interest in a career in the army,” but added that the army was not “following through” by persuading them to enlist.

Despite infantry roles having recently been opened up to women, Carleton-Smith admitted that, “Only 1% of the infantry are currently women. I can probably count them on the fingers of one hand. I probably even know their names.”

Asked if any women had applied to join the SAS, he said, “I'm not sure that any have”. Carleton-Smith previously commanded the SAS troops involved in invading Iraq in 2003.

He acknowledged that claims that the army has a “laddish culture” are “very close to the truth”. He added, “The army's culture resembles a rugby club more than it resembles a bridge club”.

Carleton-Smith also appeared to blame Black, Asian and minority ethnic (BAME) people for not having enough confidence to achieve high ranks in the army. Asked about the subject, he said, “They need to have the self-belief... to compete for those roles”.

“Mark Carleton-Smith admits the army has a 'laddish' culture," said Peace Pledge Union spokesperson Saffron Gallup. "Has he also considered that the patriarchal structure and violence inherent in the military does not match many women’s idea of the world we want to live in?"

She added, “A current navy advert shows a woman lifting weights, fixing equipment and playing football, with the tag line 'a woman’s place is here'. Apparently, this is the armed forces' idea of feminism but clearly this propaganda hasn’t worked. The values of young women such as Greta Thunberg and Malala Yousafzai are more reflective of many young women's feminist attitudes and aspirations.”

Since becoming head of the army in 2018, Carleton-Smith has at times attracted ridicule for his approach to recruitment. In September 2019, he told an audience at the DSEI arms fair in London that the armed forces could attract young recruits by becoming “environmentally sustainable”.

In July 2019, a report by the Ministry of "Defence" admitted to high levels of sexist, racist and homophobic bullying in the armed forces.

In response to Carleton-Smith's comments today, the feminist writer Jess Amy Dixon, a member of the Peace Pledge Union, insisted that "Feminism is an inehrently anti-violence ideology."

She added, "As intersectional feminists, we resist oppressions based on gender, race, sexuality, disability, class, body type and more. To be a feminist is therefore completely incompatible with the pro-violence and colonialist ideas of militarism."