BBC to allow presenters to wear white poppies on air 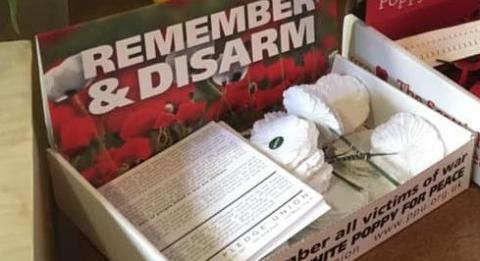 BBC to allow presenters to wear white poppies on air

The BBC says presenters may this year wear white poppies in the run-up to Remembrance Sunday if they choose to do so.

BBC presenters will be allowed to wear poppies of "any colour" between Saturday 30 October and Sunday 14 November. This has not always been the case in the past, with BBC presenters often expected to wear red poppies only.

The decision was welcomed by the Peace Pledge Union (PPU), the distributors of white poppies, who will be launching this year’s white poppy campaign tomorrow (Monday 25 October).

White poppies stand for remembrance for all victims of war, both military and civilian, of all nationalities, as well as a commitment to peace and a challenge to any attempt to glamourise war. They were founded in 1933.

In contrast, the Royal British Legion, who produce red poppies, say that they represent remembrance only for British and allied armed forces personnel, and indicate "support for the armed forces".

The BBC said, “Wearing poppies is an act of Remembrance and Remembrance poppies can be of many colours.” They said that they have a partnership with the Royal British Legion, distributors of the red poppy but added, “We have no objection to poppies of any colour provided they embrace the simple act of remembrance and do not carry a political or campaigning or commercial message.”

The Peace Pledge Union pointed out that white and red poppies are both symbols of  Remembrance embodying particular values, so are as “political” as each other.

But the PPU also expressed concern that presenters interested in wearing white poppies may face considerable pressure not to do so, given the social media abuse that is often directed at people who do not wear red poppies on television.

They urged the BBC to ensure that no member of staff would be disadvantaged for choosing to wear a white poppy.

“We are pleased to hear the BBC say clearly that presenters may wear poppies of any colour. With more people wearing white poppies in recent years, the BBC is right to recognise that there are varied approaches to Remembrance and that many people want to remember all victims of war, including military and civilians of all nationalities.

"Sadly, people who wear white poppies on television often face abuse from the far-right on social media. We urge the BBC’s management to stand up for the rights of any staff who choose to wear white poppies and to ensure that nobody is pressurised into not doing so.”

The Peace Pledge Union will hold the Alternative Remembrance Sunday Ceremony in Tavistock Square, London on Sunday 14 November 2021. It is planned as a hybrid event, with anyone welcome to join either in person or online.