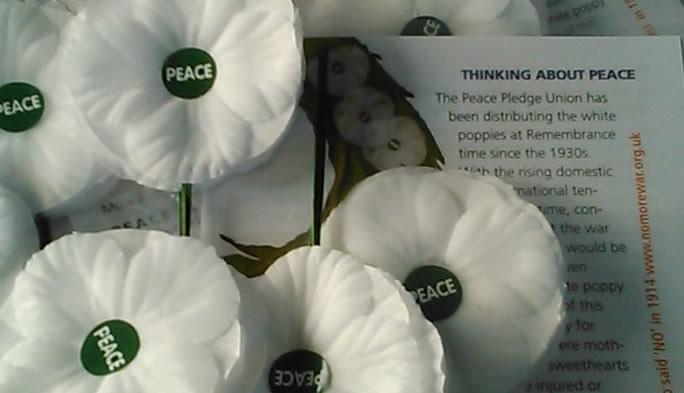 The Royal British Legion, who produce red poppies, have urged their supporters not to insult white poppy wearers on social media.

The Legion's comment comes after weeks of online abuse directed at white poppy wearers, some of it from people on the far right, who say they support red poppies and the British Legion.

During a day of partiuclarly intense Twitter discussion about white poppies (Thursday 1 November), the Royal British Legion responded to abusive tweets aimed at individual white poppy wearers by tweeting, "Please do not target people online like that for exercising their right to debate the poppy. We don't condone that at all - it's a personal choice."

After further attacks on white poppy wearers, the Legion later added, "Don't name-call people who are exercising the right to their opinion, it really does not help our cause and we don't condone it."

In reply to someone who described a criticism of red poppies as disgraceful, the Legion tweeted, "No it's not disgraceful - it's everyone's right to debate the poppy." They added that they were "open to that conversation".

At its worst, social media abuse in recent weeks has extended to threats of violence against white poppy wearers and messages saying that PPU staff should be killed.

White poppies represent remembrance for all victims of war of all nationalities, a commitment to peace and a rejection of militarism. The British Legion, however, believe that remembrance should be about UK and allied armed forces personnel and their families. They also describe red poppies as representing "support for the armed forces".

During the Twitter conversation, the British Legion confirmed their support for remembrance that covered only British and allied armed forces personnel and their families.

The PPU said that they appreciated the British Legion's support for free expression and are open to dialogue and discussion with them. However, the PPU remains critical of the British Legion's willingness to receive funding from arms companies and their promotion of militaristic attitudes, including very pro-war interpretations of history on their website.

Many white poppy wearers make donations to charities supporting veterans or other victims of war. The Peace Pledge Union has no desire to undermine such charity, while also believing that people in need should be supported by a decent welfare state and not expected to rely on charity. They point out the hypocrisy of governments that can find public money to wage wars but not to support those who have been injured or traumatised in them.

The PPU is open to discussion with people who take different views on poppies and remembrance, but not to abuse and baseless accusations.

White poppies can be bought online from the Peace Pledge Union, or from a number of shops, cafes and other outlets around Britain.