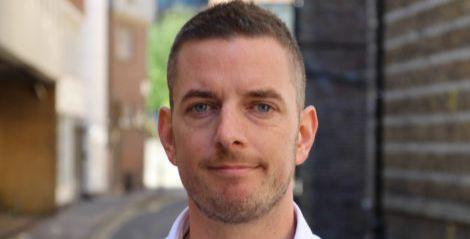 Ed Bridges is at the Court of Appeal this week to challenge the use of facial recognition technology at a peaceful protest.

He was one of hundreds of people against whom the technology was used as they protested nonviolently against the Cardiff arms fair in 2018. Ed Bridges, who lives in Cardiff, is an active campaigner for peace and civil liberties and an elected member of the Peace Pledge Union's national Council.

Last year, a court ruled that South Wales Police had behaved legally in its use of automated facial recognition (AFR). Ed has now taken his case to the Court of Appeal, backed by the civil rights group Liberty.

"This is information unique to you, similar to a digital fingerprint," explained Ed Bridges. "If the police took the fingerprints of everyone attending a peaceful protest, we'd consider that a gross infringement of our rights - and facial recognition is no different."

It means that a person recorded on one occasion may be identified by the technology on another occasion - even if they were behaving peacefully and lawfully both times. In practice, AFR has consistently mis-identified people, at times with an error rate of over 50%.

The technology is known to be less accurate in identifying the faces of individuals who are not white. This raises the prospect of further injustices in the policing of black, Asian and minority ethnic people, just as the Black Lives Matter movement is drawing increasing attention to the issue.

Ed Bridges says that as a football fan and a pacifist, he is concerned about the technology being used at football matches and at demonstrations, as well as against people going about their daily business in streets and shops.

"The use of this technology against peaceful protesters should prompt us to ask whether we live in a truly democratic society which respects civil liberties," said Ed.

He explained, "Using techniques and technologies to create a 'chilling effect', putting people off the idea of protesting altogether, is a tactic more closely associated with authoritarian regimes than with a democracy. Peaceful protest is often the only tool we have at our disposal to highlight the state’s complicity in violent acts. If it is undermined, it clears the path for government to be given free rein to act without adequate scrutiny."

Read more from Ed here about why he has brought this case, and its implications for peace campaigns.