Civil liberties have always been of concern to pacifists and other nonviolent campaigners. PPU Council member Ed Bridges explains why he is in court this week to challenge the use of facial recognition technology in South Wales. 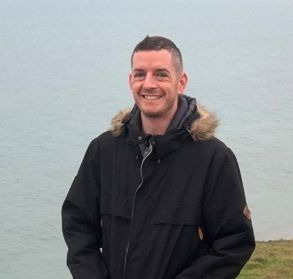 Many friends from the Peace Pledge Union have been kind enough to send messages of support in recent days for the appeal I’m bringing (supported by Liberty) against last year’s ruling that South Wales Police’s use of facial recognition technology is lawful.

As well as the obvious implications the ruling has for our understanding of privacy law and the right to a private life, I believe it also has significant implications for those of us who value peaceful protest in a free and democratic society.

My decision to bring the case was influenced by two of my passions – football and pacifism. As a football fan, I am well used to seeing overly-zealous policing at games, treating all fans as criminals rather than citizens enjoying a day out at a sporting fixture. I was worried by the potential for even more invasive policing of my hobby, where my personal data would be scanned and checked against a database without my consent and where tensions between fans and the police would be inflamed by the presence of yet more cameras being pointed at us.

But it is the second passion, my pacifism, which lies at the heart of this article. It is no accident in my view that one of the early deployments of facial recognition technology in South Wales was against peaceful protesters campaigning against an arms fair in March 2018. I was part of that crowd, and would have been one of hundreds of people who had our data scanned by the facial recognition van.

From what I saw on the day, it was a largely benign protest, with a heavy turnout from local peace groups, Quakers and Cymdeithas y Cymod (the Fellowship of Reconciliation in Wales). And yet South Wales Police chose to scan our faces, take our data and treat us all as criminals. In my view, and the view of many others present, they did so to try and deter people from using their right to peaceful protest and to encourage us to simply go away.

To fully understand this, people need to appreciate that facial recognition is not analogous to traditional CCTV – it isn’t just an image of your face which is being recorded, but a biometric map of it. This is information unique to you, similar to a digital fingerprint. If the police took the fingerprints of everyone attending a peaceful protest, we’d consider that a gross infringement of our rights – and facial recognition is no different.

This raises two questions for me. Firstly, if the police are prepared to violate the privacy and human rights of peaceful protesters, what on earth might be the implications for more marginalised groups in society? We already know that this technology is less able to successfully recognise faces that are not white – which raises the worrying prospect of a wedge being driven yet further between black communities and the police at a time when the #BlackLivesMatter movement has already highlighted entrenched and unjust policing patterns.

Secondly, the use of this technology against peaceful protesters should prompt us to ask whether we live in a truly democratic society which respects civil liberties if our right to peaceful protest is being curtailed. Using techniques and technologies to create a “chilling effect”, putting people off the idea of protesting altogether, is a tactic more closely associated with authoritarian regimes than with a democracy. Those in the peace movement will understand peaceful protest is often the only tool we have at our disposal to highlight the state’s complicity in violent acts. If it is undermined, it clears the path for government to be given free rein to act without adequate scrutiny.

In that sense, resisting the use of facial recognition technology by state actors is not just a matter of personal liberty and privacy – it is fundamental to how we campaign for a more peaceful world.

Ed Bridges is a civil rights campaigner from Cardiff and an elected member of the PPU’s national Council.