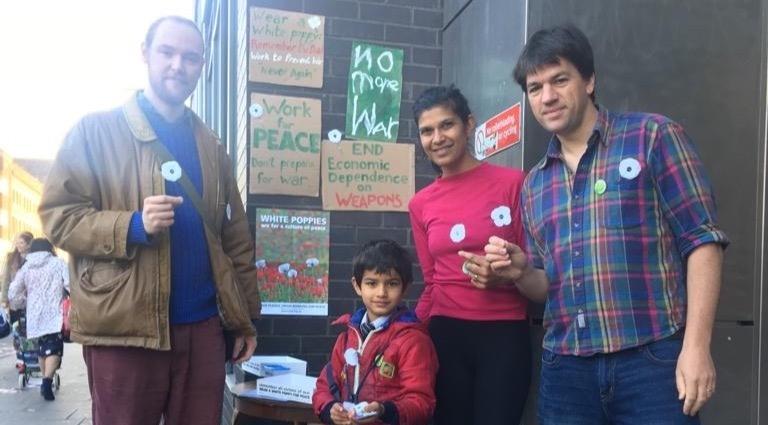 The Peace Pledge Union has launched a new project to support people in campaigning about everyday militarism in their own communities.

The initiative will see the publication of new resources and campaigning guides alongside a series of training events in different parts of the UK during 2020.

It aims to help people to learn from each other's experience, to share ideas and to plan effective campaigns to change things at local level.

The project has been inspired by active and successful campaigns in resistance to everyday miltarism. Members of Leicester for Peace (including PPU members and allies) successfully achieved a policy change in their city, with the local authorities now refusing to allow the armed forces to invite children to handle weapons when they run events and stalls in Leicester.

In cities such as Bristol and York, campaigns over military and arms company involvement in LGBT Pride marches in 2018 led to an absence of militarism at the events in 2019.

On other occasions, informal groups of individuals have asked the PPU to provide flyers to challenge Armed Forces Day in their area, making clear the demand for resources that can help people to speak out about militarism in their own communities.

The new project will see the PPU working alongside local peace organisations and other local groups, whether informal groups of friends or more official organisations such as student bodies, faith groups or union branches. The aim is to provide space to share ideas and learn from each other, while also gaining training in specific skills.

There will be new resources in print and online, published over the coming months. They will be accompanied by a series of training events in different parts of the UK with workshops on skills such as devising a campaign strategy, lobbying your local council, engaging with the media and nonviolent direct action. These will bring experienced people together with others who are new to activism.

There will also be new campaigning materials such as leaflets, posters and postcards, for use in particular contexts, such as on Armed Forces Day or in resisting a military presence in universities.

The Peace Pledge Union has thanked the Joseph Rowntree Charitable Trust for generously funding the project.

While the initiative is in its early stages, there will be more news soon about the first online resources and plans for the first training events.

If you have ideas or questions, would like to work with the PPU on this initiative, or are part of a group that would like to host a training event, please give us a shout at mail@ppu.org.uk or on 020 7424 9444.