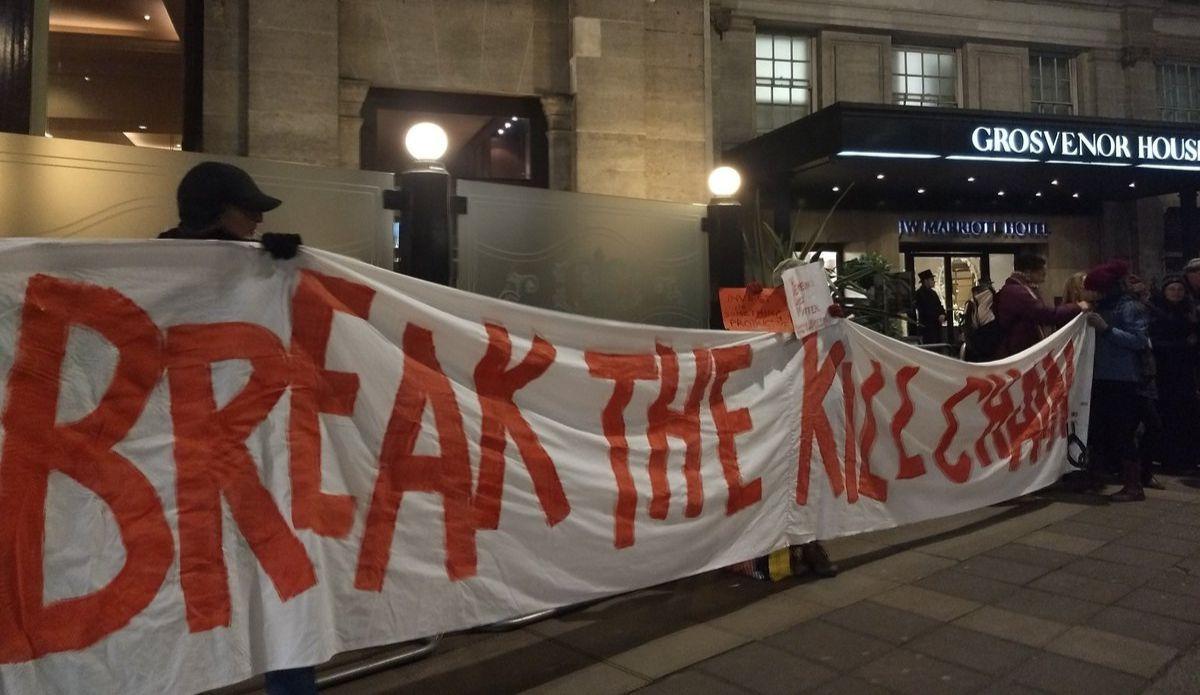 Thursday 23 January 2020
A super-expensive networking dinner for arms dealers has been nonviolently disrupted by hundreds of peaceful protesters.
Members of the Campaign Against Arms Trade (CAAT), the Peace Pledge Union (PPU) and several other groups demonstrated outside the Grosvenor House Hotel in London's Mayfair last night (22 January 2020) as arms dealers and their allies scuttled in to the £470-per-head event.
Criticis pointed out that the event was also attended by military top brass and politicians, allowing arms dealers not only to make dodgy deals over dinner but also to exercise undemocratic influence over people with power.
CAAT and others had earlier applauded the decision of leading sports presenter Clare Balding to pull out of speaking at the gathering, which was officially the annual dinner of the UK arms dealers' trade body, euphemistically known as ADS (Aerospace, Defence and Security).
Several attenders at the lavish banquet were seen to turn away after seeing the protesters outside the hotel. Others more or less ran past the protesters as they chanted "arms dealers feast while Yemenis starve".
Some took nonviolent direct action at the event, with one entrance blocked for the whole evening by two PPU members who lay down and superglued themselves together while covered with a banner reading "Stop Arming Saudi".
The PPU said that the action was a further reminder that pacifists are not passive. They added that the PPU was very glad to work alongside CAAT (to which the PPU is affiliated) and many other groups and individuals who share their passion for peace and human rights.
British-based arms companies such as BAE Systems have been heavily involved in the provision of weapons to the Saudi forces bombing Yemen in a war that has created a humanitarian catastrophe, leading to thousands of deaths from disease and starvation as well as from the targeting of civilians by armed forces.
Meanwhile, UK armed forces are training Saudi forces. This includes the training of Saudi pilots by the UK's Royal Air Force at RAF Valley in North Wales.
Campaigners outside the hotel applauded after a message of solidarity was read out from people in Yemen.
Tags:
peacebuilding & nonviolence
everyday militarism