Events around the world will mark Conscientious Objectors' Day 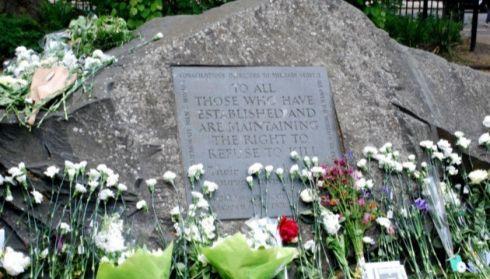 Events around the world will mark Conscientious Objectors' Day

British cities including London and Edinburgh will be among the places around the world that will mark International Conscientious Objectors' Day tomorrow (Wednesday 15 May).

Hundreds of people are still in prison across the world, from Colombia to Israel, for refusing to fight and to be part of armed forces. Tomorrow's ceremonies and other events are an opportunity to remember people down the years who have struggled for the right to refuse to kill, as well as to offer solidarity to people resisting war, conscription and militarism wherever they are found.

At 1.00pm in London tomorrow, white flowers will be laid and a minute's silence observed at the Conscientious Objectors' memorial stone in Tavistock Square near Euston. The ceremony is organised by the peace and human rights organisations that make up the First World War Peace Forum, including the Peace Pledge Union. All are welcome at the ceremony.

Other speakers will include Lois Bibbings of the University of Bristol, an expert on conscientious objection in the First World War. Other speakers include Jay Sutherland, who made headlines in Scotland over the last few years as a teenager challenging miltarism in his own school. Jay is an example of conscientious objection in its broader sense, resisting everyday militarism.

The London ceremony will also feature songs led by Sue Gilmurray and information about current campaigns.

At 5.00pm in Edinburgh tomorrow, people will gather by the Wellington Statue at the east end of Princes Street for a vigil in support of conscientious objectors. The vigil is organised by the Edinburgh Peace and Justice Centre.

Other events in the UK tomorrow include a showing of the new film War School in Leicester, a vigil in Manchester, an exhibition in Bradford and a demonstration at the offices of multinational arms company Lockheed Martin in London.

All these events are open to anyone wishing to attend.

In countries in which conscription is still in force, International Conscientious Objectors' Day is often a time for protests calling for a change in the law. Peace campaigners in Colombia have recently won signficant gains in their campaigns for the rights of conscientious objectors, but there will be large protests in Colombia tomorrow to challenge military conscription.

As the British section of War Resisters' International, the Peace Pledge Union is pleased to stand in solidarity with people marking International Conscientious Objectors' Day in six continents.

Spring 2019 marks the centenary of the release of most - but not all - conscientious objectors and other peace activists from British prisons at the end of the First World War.