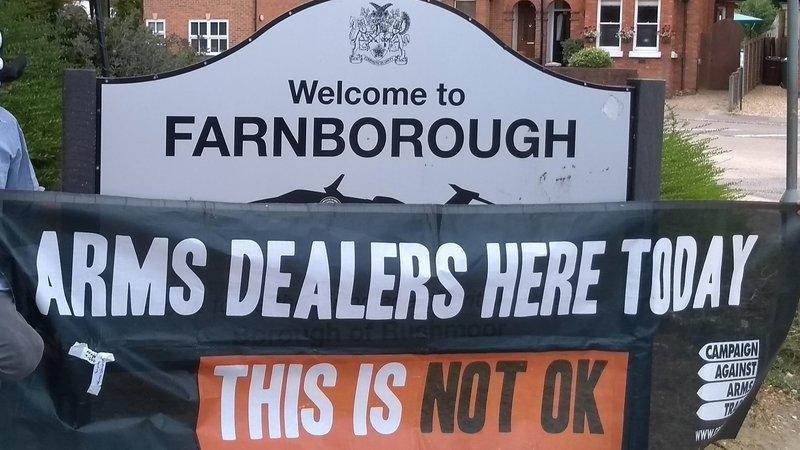 Boris Johnson's recent military pact with the US and Australia will be challenged by protests at an arms fair in Farnborough today.

The AUKUS deal announced last month involves the UK and US supplying Australia with the means to develop nuclear-powered submarines.

The UK Submarine Delivery Agency is one of the “event partners” for today’s arms fair in Farnborough in Hampshire. The US and Australian defence departments are also represented.

The Peace Pledge Union (PPU), Britain’s leading pacifist organisation, is supporting local people in Greater Rushmoor Action for Peace who will be holding nonviolent protests throughout the day.

There will be a demonstration outside Farnborough Main rail station from 8.00am, and a protest at the Farnborough International Exhibition Centre, where the arms fair will be held, from 9.30am. The protests are supported by several other groups, such as the Campaign Against Arms Trade and the Fellowship of Reconciliation.

The Farnborough arms fair is known formally as DPRTE (Defence, Procurement, Research, Technology, Exportability). It has previously been based in Bristol, Cardiff and Birmingham, but was chased out of each city by repeated protests.

Today’s event is the second of four arms fairs to take place in the UK in the space of two months. Last month’s DSEI arms fair in London was met by sustained protests including nonviolent direct action.

The Peace Pledge Union pointed out that the AUKUS deal is one of several militaristic policies announced by Boris Johnson’s government over the last year. In March, Johnson raised the limit on the UK government’s nuclear warheads by 44% and announced the largest percentage increase in UK military spending since the 1950s. On Sunday, minsters promised £5bn for a new Digital Warfare Centre.

“Covid has been a deadly reminder that bombs and bullets cannot keep us safe from the most serious threats we face – pandemics, poverty and climate chaos. Boris Johnson's military deal with the US and Australia will stir up military tension while doing nothing to make anyone any safer. Even while ministers are snatching away £20 a week from people on Universal Credit, they have found £5bn for a new Digital Warfare Centre. People are travelling to Farnborough from around the UK to speak out against militarism and to call for an urgent change of priorities.”

Today’s protests have been organised by local people from Greater Rushmoor Action For Peace. They are backed by the Peace Pledge Union and other groups.

A list of protests and similar actions planned for today by Greater Rushmoor Action For Peace can be found at https://www.ppu.org.uk/civicrm/event/info%3Fid%3D206%26reset%3D1.