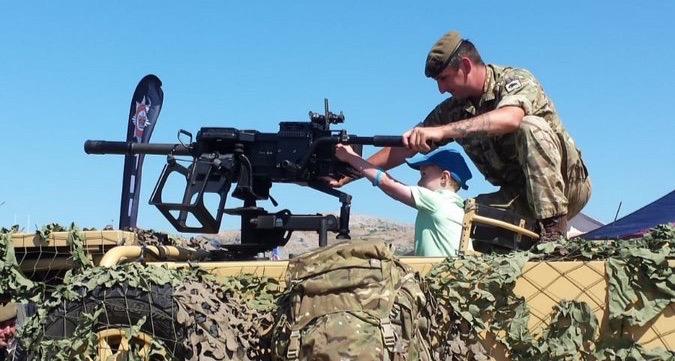 The Peace Pledge Union has warned that small children will be invited to handle real weapons at Armed Forces Day events this weekend.

The warning follows controversy after children as young as seven were invited to handle guns on last year’s Armed Forces Day. Armed Forces Day will this year take place on Saturday 29 June.

The Peace Pledge Union (PPU) said it was harmful and misleading to give children the impression that armed force is fun, exciting and uncontroversial.

The PPU also revealed that they have heard from parents who have kept children off school during events this week marking the run-up to Armed Forces Day. Very young children at primary schools are among those most affected by this week’s militaristic events.

Examples include a school in Hampshire that is asking children to wear “camo” fancy dress today. A 7-year-old girl in Aberdeen has won an award for designing an Armed Forces Day T-shirt. The multinational arms company BAE Systems is sponsoring a “free family fun day” for Armed Forces Day in Gillingham tomorrow.

The PPU pointed out that promotion of the armed forces is a political position and insisted that young people should be allowed to hear a range of views and perspectives on war as they grow up.

PPU members and supporters will be giving out postcards challenging Armed Forces Day in various places where events are taking place.

Armed Forces Day involves events around the UK. The National Event is this year being held in Salisbury, sponsored by at least eight arms companies.

“In a society worried about violence and alarmed by knife crime, why are we giving children the impression that weapons are fun? At the Peace Pledge Union, we've been hearing from parents, teachers and young people who are alarmed by what is going on in schools and local communities. Schools are requiring children to take part in a partisan political celebration. Local councils are using taxpayers’ money to fund events that present war as family entertainment.

“Despite all the rhetoric, Armed Forces Day is not about supporting veterans who are suffering. It’s about drumming up support for war by the back door.”

Armed Forces Day was introduced in the UK in 2009, following widespread public criticism of the wars in Iraq and Afghanistan. It is held on the last Saturday in June. Local authorities, schools and community groups are encouraged to host local events, while the National Event, usually attended by the Prime Minister and members of the royal family, is held in a different town or city each year. This year, the National Event will take place in Salisbury.

Armed Forces Day last year (30 June 2018) involved a number of events at which small children were invited to handle real weapons, notably at the National Event in Llandudno (pictured above).